Review of the Year: January

WE STARTED where we are now. In the cold.

The Bomb Squad came to town on January 4th as they detonated a suspect package in Grays High Street. Prime Minister Gordon Brown was the first of many high profile visitors to DP World London Gateway in Stanford-le-Hope. Councillors were criticising Basildon hospital (and continue to do so); 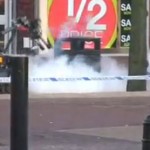 Steve and Lyn Haynes left the Orsett Hall Hotel after many years in charge. Councillor Yash Gupta was awarded with “Citizen of the Year” in a national ceremony.

There was tragedy in Stanford as popular teenager James Carley died in a car crash on the A13. The bin men were revolting.

The Thurrock Council planning committee became the subject of scrutiny and controversy as the leading London QC was brought into a private session where he “counselled” the committee on a number of planning decisions.

Tattoo John was worried about his gas bill!