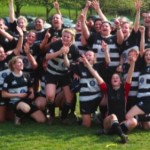 Thurrock RFC Ladies (T-Birds) have won their league AND the play off so are now in the National Championship 1 South, one step away from the premiership

The T-Birds travelled to Dorking RFC where they met Bournemouth based Oakmeadians ladies.
Having lost the play off for promotion only 2 seasons ago, this team exuded a quiet determination and defiance. Losing was not an option considered by any member of the team.

The conditions were really too warm for Rugby, but this would play into the hands of the fast T-bird backline who set their stall out early with the clear intention to run everything.

With a few minutes of both sides “feeling each other out”, the Ts went for the throat, England u20 Fly Half gliding through a gap to touchdown in only eight minutes.

The shell shocked Oakmeadians tried to up their game but only a few minutes later Sally Appleton found space out wide and ran in under the posts, the conversion bringing the score to 12-0 in only 12 minutes.

Staring defeat in the face, Oaks raised their game and pressed hard for their own score, driving Ts back into their own 22 for a long period, but the T’s massive defence held and held as tackle after tackle went in but Oaks looked constantly dangerous with good passing moves and offloads.

Finally, after being warned, Centre Katie Fenn put in one hard tackle too many that rode up after contact and she was given 10 minutes rest by a considerate referee.

As always with their backs to the wall, Ts raised their game to a new level and suddenly the backs had space everywhere despite being a player short.

In the 10 minutes of the sin bin, Dannie Harris scored a brace down the wing and India Harvey unpicked the defence in midfield. With the kicks going over, the halftime score was 33-0 and the game was over as a meaningful contest.

Oaks put in a massive 10 minutes after half time but ran out of steam, and as T’s began to use fresh legs, more trys came.

Emily Scott completed her hat trick and finished with a personal points total of 25. India Harvey got her second and Lauren Kidd scored a fine solo effort.

Final Score was 55-0 which means that The Thurrock T-birds are promoted to Championship One South, the second level of ladies’ rugby.