A team from the health overview and scrutiny committee, cllr Barry Johnson, cllr James Halden and cllr Barbara Rice took the time to visit Orsett Hospital on Thursday. Cllr Johnson said that “It is vital residents understand that their elected representatives are always working behind the scenes to ensure they receive the best care. 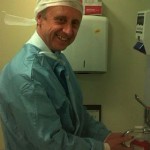 “We have had a lot of attention on Basildon hospital recently as we fight for improvements and it was so important that we get around to other facilities to get a broader view of health care”.

Cllr Halden added “While we pour over thick reports on hospital activity, it was nice to see and talk to the dedicated medical staff that are so important to Thurrock”.