A VETERAN Tory councillor has dealt an embarrassing blow to the Tories campaign to regain power at Thurrock Council by telling voters to turn their backs on his own group and vote for UKIP.

Aveley and Uplands councillor John Cowell has put up UKIP posters backing the local candidate Tim Aker in his hardware shop Arkwrights at the top of the High Street, Aveley.

Councillor Cowell is standing down on May 5th but is still registered by Thurrock Council as a member of the Conservative group.

He said: “Young Tim Aker is a fine candidate and I agree with many of his policies, especially with respect to immigration and the European Union.

Asked if he felt he was betraying the Conservative candidate for Aveley, former Mayor, Maureen Pearce.

Cllr Cowell said: “Since she was selected, she has not exchanged one word with me at all.”

Councillor Cowell did not rule out a return to Thurrock politics under the UKIP banner.

He joins a number of disaffected former Conservatives in the political melting pot that is Thurrock politics. Cllr’s Anne Cheale and Ian Harrison broke away to form the Thurrock Concerned Conservatives, cllr Stuart St-Clair-Haslam left to join them and then left them to join UKIP. 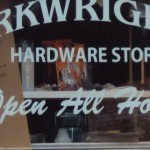