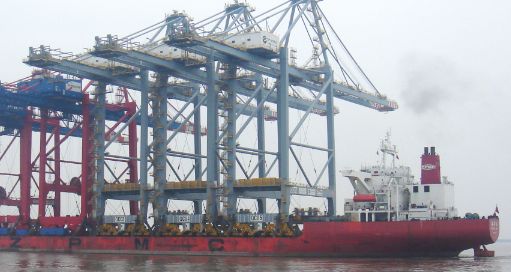 TOWERING at a height of 138 metres, taller than the London Eye, London Gateway’s colossal quay cranes are on their way to the UK’s new deep-water container port.

The first three of the port’s giant quay cranes, manufactured by Shanghai’s Zhenhua Port Machinery Company (ZPMC), have started their journey from China.

The enormous crane’s boom has a reach that will allow it to pick up containers 25 rows across deck, beyond the width of the world’s largest container ship.

Tim Halhead, London Gateway Operations Director said: “The size of the cranes future proofs the port, allowing London Gateway to handle the next generation of ultra large container ships. These cranes are among the most advanced in the industry, assisting our operatives to deliver a reliable and consistently high level of productivity.”

The cranes are semi-automated, which allows quick and efficient handling of containers. They are also connected directly to the Terminal Operating System, which tracks the containers and sends work orders to the crane operator.

The port will start operations on the first berth in Q4 of this year with five quay cranes, and two rail mounted gantry cranes provided by ZPMC, while Cargotec will provide 10 automatic stacking cranes and 18 straddle carriers for the first berth.

London Gateway, the 3.5 million TEU container port will bring significant supply chain savings to importers and exporters. By being located much closer to the vast majority of the UK market, the port will cut delivery costs.

Drewry, the independent maritime consultancy, has indicated that shippers will be able to reduce round-trip transport costs by £59 pounds per container to the Midlands and the North-West and £189 per container for London and the South-East, representing about 90% of the UK deep-sea market.