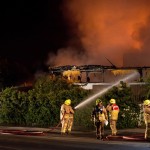 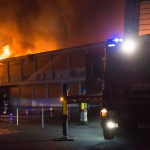 Firefighters are tackling a fire in a two storey building measuring 75 by 30 metres in Daiglen Drive, South Ockendon. The incident commander reports that the ground floor of the building is well alight while the first floor is heavily smoke logged.

Crews are using two hose reel jets and one main jet to tackle the fire.

Update 22:46hrs: The ground floor of the building is now 80% alight and the first floor 20% alight. Crews are tackling the fire using two main jets and one hose reel jet.

Update 23:20hrs: Surrounding homes are being evacuated due to the large smoke plume being created by the fire.

Update 00:30hrs: The incident commander reports that the fire is now on both floors of the building and that the building – which is a disused school – is now 50% alight. Crews are using four main jets and one ALP monitor to tackle the fire.

Divisional Officer Mark Samuels said: “It is a large fire in a large building and crews have been working extremely hard in arduous conditions and have done an excellent job in surrounding the fire.

“The water supply in the area is a domestic supply and we have had problems getting a large enough supply to tackle the fire, but we have now established a good supply by running hose to a nearby hydrant and we have the aerial ladder platform in operation to put water on the fire from above.

“The building was disused so there has been no life risk although we have had to evacuate 10 homes nearby because of smoke from the incident.

“Crews will be here for many hours to come and I expect that we will be working through the night to tackle this fire.” 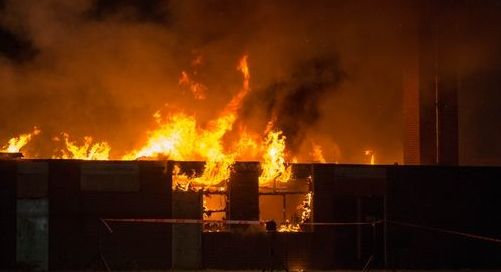 Update 07:00hrs Friday: Firefighters remain at the scene and are still tackling the fire. A five pump, one aerial ladder platform relief took over at 06:00hrs.

One Response to "Massive fire in disused building in South Ockendon"