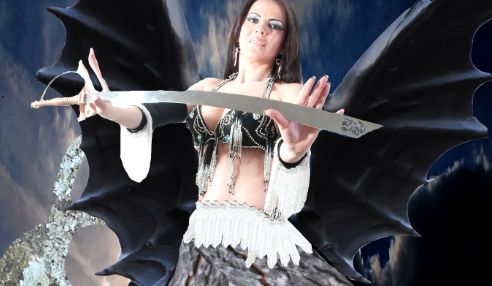 documentary photographer Antonisia Schroder is exhibiting in Grays this month as part of the 2013 Essex Summer of Art, despite being hospitalised since February because she has been unable to walk or stand up.

Antonisia, who was one of the four founding artists at the centre of the Thurrock contribution to the Summer of Art last year, suffered a migraine four months ago which left her in constant pain and without the use of her legs. In the weeks and months since, she has stayed in Basildon Hospital and the National Hospital for Neurology in central London, but what has kept her hope alive is her love of photography.

She has put together a wonderful series of large photomontage pieces for the ‘Expressions of the Soul’ show at the Thameside Complex in Orsett Road running from 1 to 16 June 2013. The pieces are taken from her book ‘Zonia – more than a fairytale…’ which was published earlier this year. The book tells the story of the mythical land of Zonia and the four ‘gods’ who rule over it, and follows a magical narrative with twists and turns which takes the reader through a journey with an important message.

With its story rooted in mythology and fairytales, the book is available to buy from the website www.blurb.co.uk.

Antonisia is still in hospital and is hoping to soon transfer for physical and neurological rehabilitation at a special unit in east London. But, she says, she did not want her health to prevent her from expressing herself through art and being a part of this year’s Thurrock Art Trail, which is even bigger than last year’s successful event.

She said: “The story of Zonia and the pictures which accompany it were something that kept me going through my period of ill health. I have had a difficult and painful few months and come up against many challenges, and I am sure I have more to come as I can still not stand up, but my photography and my love of art have kept me sane and kept me strong.

“I hope that the ‘Expressions of the Soul’ exhibition can give hope and inspiration to viewers and lead more people to understand what art can achieve and give to you through times of challenge.”