Nursing through the generations at Basildon hospital

WHEN Samantha Thake was diagnosed with type 1 diabetes as a young child, one of the first people who helped care for her at Basildon University Hospital was student nurse Nicola Lewis.

The two struck up a close relationship that has endured for nearly 20 years, as Samantha grew up and Nicola developed a career in specialist diabetes care. This week, the two women celebrated the birth of Samantha’s first baby on the maternity ward at Basildon Hospital.

With Nicola’s support during her pregnancy, Samantha controlled her glucose levels so well that her baby was not overweight, and did not have to be taken the neonatal intensive care unit. Baby Sienna still has a higher than average risk of acquiring type 1 diabetes, but this will be reduced because Samantha intends to breastfeed her for as long as possible.

Nicola said: “It’s been a real privilege to see Samantha grow from a child into a mother. As a nurse the most rewarding aspect of my job has to be seeing the education Samantha has had come to fruition. Because she understands her diabetes, she is able to control it and this has led to the best possible health for her and baby Sienna.”

Samantha’s mother Debbie first realised there was something wrong with her daughter in 1992, when she began losing weight and seemed constantly thirsty.

Samantha was diagnosed with type 1 diabetes, which develops when the body fails to produce insulin, essential for controlling levels of blood sugar. The causes are not related to diet or lifestyle and people with the condition need to take insulin.

Debbie recalls: “Samantha became a patient at Basildon Hospital and without exception, the service was fantastic.

We said we would sell our house to get her the best treatment but she could not have had better care.”

While Samantha was young, her diabetes care was relatively easy. She did well and was happy at school, and loved horse riding. “Apart from keeping insulin in the fridge for her regular injections no one would have known she had a medical condition,” says Debbie.

But when Samantha hit adolescence, like all teenagers, she began to resent what she saw as interference from adults to ensure that she stayed well.

Debbie says: “It was very difficult, she hated me checking what she was eating and being told to monitor her blood sugar. I would text Nicola for help.”

Nicola jokes: “She was a nightmare! As a typical teenager she didn’t want to listen to her mum but was a bit easier with me.”

By this time Samantha was using a pump to continuously administer her insulin. Nicola had worked for a spell as a nurse educator for the company that produced the pumps, and was therefore in an even stronger position to support Samantha with managing her condition.

“As the child becomes an adult the support switches to them and it’s about helping them to become independent by educating them about diabetes, ways it can be controlled and the consequences if you don’t control it.”

Now aged 29 and settled in Benfleet with her partner Stephen Price, when Samantha became pregnant she knew where she wanted to give birth. “We live in Benfleet, so Basildon is not our nearest hospital but I had no doubts where I wanted to have the baby.”

Pregnant women with diabetes need specialist care because of the risk of complications. Frequently their babies are heavier and have to be born by caesarean section, and there is also a high chance the babies will require special care. Samantha contacted Nicola at Basildon Hospital, and once again was placed under her care.

Nicola explains: “If the mother’s blood glucose level goes up, some passes into the placenta. This causes the baby to produce insulin, which they would not normally do in the womb. After they are born, they continue making insulin, leading to dangerously low blood sugar for the baby.”

With Nicola’s support during her pregnancy, Samantha controlled her glucose levels. She said: “I was so happy with the care I had during pregnancy and the birth. Everyone has been absolutely brilliant. And to have Nicola there for me, when we have known each other so long, made it even more special.”

Six of Nicola’s diabetes patients have given birth this year and all of them have been nursed by Nicola since they were children.

Nicola added: “It’s a happy coincidence that my career has gone down a path that has kept me in touch with Samantha and the others. As a nurse it’s great to have that connection and to see how their life develops, especially when it involves such momentous occasions as becoming a mother.” 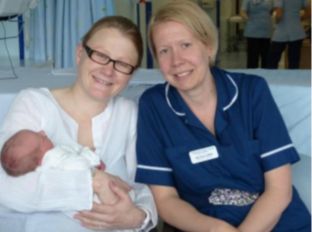