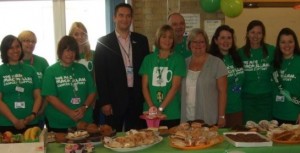 This is the seventh year that the event has been held at Basildon Hospital.

Caron Ellis, from Billericay opened the event. The event was opened last year by her mother, Mrs. Maureen Ireland who sadly died. Caron said “When my Mum was diagnosed seven years ago she became a real fighter. People called her amazing, an inspiration. But she couldn’t have done it without the help and support from the staff at Basildon Hospital.”

“My mum opened the coffee morning last year and I’m truly honored to open the event this year in her place.”

Roger Crellin, Lead Macmillan Counsellor said “Every year we are amazed and very grateful for the response we receive, and the money that is kindly donated.”