A STROKE patient gave a moving account of her treatment at Basildon Hospital, at a public awareness day held by the Trust.

Teresa Duke, 50, had a major stroke two years ago, caused by a blood clot. Although the incidence of stroke increases rapidly with age, about a quarter of strokes occur in people under 65. Teresa told an audience of patients, carers and clinicians: “I was in a bad way when I came in. I was totally paralysed on my left side and I could not hear or see. I remember thinking I would not be able to live like that because I would not unable to look after my son.” 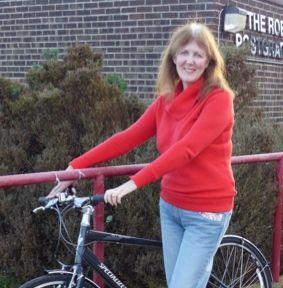 In hospital she gave verbal consent to treatment with clot busting drugs. She recalls: “The doctors kept checking me and after 15 minutes I started to get some movement back on my left side. The hospital staff were cheering and high- fiving; it was so lovely seeing how much they cared.

“But I did not know if I would be able to walk again and I was still very frightened. I thought that if I just got through the next 24 hours it would be ok, so I was scared to go to sleep. I told a nurse and she sat with me all through the night, in between looking after the other patients. She even came back when she was off duty to see how I was.

“When I was allowed out of bed I managed to shuffle to the toilet and I was so excited. Three days later I was discharged from hospital and went back home.”

She added: “If I had not had this treatment I would be completely paralysed, or worse, and I can’t thank the doctors and nurses enough. I want to tell people about my experience so they know how important it is to get to hospital quickly if there is a chance they have had a stroke.”

Since her stroke, Teresa, who is a reflexologist and artist, has made an excellent recovery and even started riding a bike, encouraged by her son.

The awareness day was organised by the stroke team at Basildon Hospital to inform people about stroke prevention and after-stroke treatment. Ischaemic strokes, the most common type, are caused when blood clots block the flow of blood to the brain.

Among the presentations given by specialist consultants and therapists was a talk by Dr Anil Agarwal, Consultant Stroke Physician, on the vital role of clot-busting drugs. Dr Agarwal told the audience: “Time lost is brain lost. Clot busting drugs are twice as effective if given within 90 minutes of stroke. There is a major difference in the level of disability to the patient if they are given in that time, with 30 per cent of people having minimal or no disability following a stroke.

Dr Agarwal explained that strokes can occur to people of any age, but there are certain factors which greatly increase the risk, including smoking, excessive alcohol, being overweight, lack of exercise, high blood pressure and high cholesterol.
He added: “Raising public awareness of the causes and symptoms of stroke, and the importance of fast treatment, is of the utmost importance. We cannot give patients the same benefit if they don’t get to hospital quickly.”