STAFF who work to make Basildon and Orsett hospitals clean, green and pleasant were recognised in a new awards scheme that aims to encourage employees to go the extra mile for patients.

David Hutchinson, gardener at Orsett Hospital, and the A&E housekeepers at Basildon Hospital were named employee and team of the month for November.

Presenting the awards, Clare Panniker, Chief Executive of the Trust, told the winners: “Your efforts don‟t always get the recognition they deserve, so it is right we have this opportunity to thank you.”

David, who received an impressive 13 nominations, was awarded a cheque for £50 which he plans to spend on a planter. He said: “I like to keep things looking nice. It helps patients take their mind off their treatment.”

Housekeepers Lesley Roake and Kelly Baycroft were presented with five £10 vouchers for themselves and team colleagues, Margaret Clerking, Claire Marsh and Christy Martin.

All the people who nominated David praised him for working relentlessly in all weathers. Among them was Karen Lee, Matron, Outpatient Services. She said: “Dave works above and beyond his role, is always cheerful and takes great pride in his work. He once said to me, „We are here for one reason; that is the patients, families and carers who visit this hospital.‟” 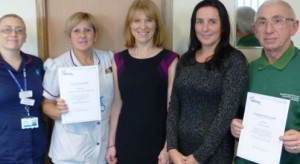