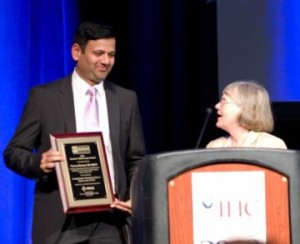 doctor at Basildon and Orsett hospitals has received an international award for ground-breaking research that could improve treatments for migraine sufferers.

Dr Farooq Maniyar, Consultant Neurologist, won the Harold G. Wolff Lecture Award 2013, given by the American Headache Society for the most significant original research in headache medicine of the year. The prize is regarded worldwide as one of the most prestigious in the field.

Headaches are among the most common disorders of the nervous system, with nearly half the adult population suffering from them at least once a year. It is estimated that in Britain, 25 million working or school-days are lost every year because of migraine alone.

Dr Maniyar’s study was the first to measure brain activity in the early stages of a migraine and as the attack continues.

Migraine sufferers volunteered to have headaches triggered with nitro-glycerine. They then underwent highly detailed three-dimensional brain scans before the attacks began and as they progressed.

The scans revealed changes in key areas of the brain before the headaches started, that could lead to a breakthrough in treating patients.

Dr Maniyar explains: “One of the main difficulties in finding effective treatments for migraine is that we are not entirely sure what causes them. Previous studies have concentrated on the theory that they begin in the surrounding nerves and blood vessels.

However, our new research shows that changes take place in areas of the brain, particularly the hypothalamus, before the headaches begin.

“The hypothalamus maintains the normal environment of the brain. It seems to be involved in the early stages of a migraine, which may explain why these headaches occur when people change their routine in a way that causes them stress. It may also be the reason why people experience thirst, cravings for food, yawning and mood change before their migraine starts.”

Last year, Dr Maniyar launched a specialist headache clinic at Orsett Hospital for patients affected by difficult-to-treat headaches. People who wish to attend need to be referred by their GP or a hospital neurology department.

Dr Maniyar conducted his research with a team of colleagues at the University of California Headache Centre, during a research fellowship. The award included an invitation to Dr Maniyar to deliver the Harold G. Wolff Lecture at a meeting of the American and International Headache Society in Boston.