Maternity staff at Basildon hospital go behind the camera 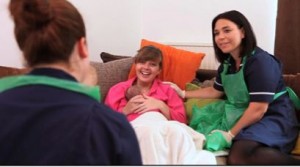 MATERNITY staff and new parents at Basildon University Hospital used their movie-making talents to help prospective parents prepare for the birth of their babies.

Midwives and new mums and dads volunteered to help produce a series of short films to give others an idea of what to expect before, during and after the birth of their baby. Viewers are given a virtual tour of the maternity unit, including the birthing pool and operating theatre for mothers who need a caesarian. Thousands of people have viewed the films which are available on You Tube via links on the Trust website.

The films also include advice on going into labour and when to come to hospital, along with information about pain relief, delivery options including home birth and services for anyone who has complications, such as high blood pressure.

The film project was initiated by Jennie Ponting, Head of Nursing for Midwifery and Gynaecology, and led by midwife Tracy Braddock. Tracy, the manager of Mulberry Assessment Centre where pregnant women who need close monitoring are cared for, had shown her creative side during the refurbishment and redecoration of the centre.

Tracy said: “Helping to produce the films was a brilliant experience. We had to come up with a script and a music score, and cast mums-to-be and new parents who volunteered to take part. Understandably the women who had just given birth didn’t always want to be filmed right then, so they very helpfully came back in to shoot their scenes.

“I also helped with the final edit. We have had a lot of positive feedback about the films. When people come in to have their babies they recognise maternity staff and the different facilities and areas in the unit.”

Jennie Ponting added: “Previously we had to rely on giving parents-to-be tours of the maternity unit on Saturday afternoons, but it wasn’t always possible to show them everything when rooms are in use for birthing. Of course in exceptional circumstances, we will still show people round, but watching the films at home is much better, because they provide all the information and contact details to help new mums and dads have a good experience.”