JEREMY Hunt, Secretary of State for Health, praised Basildon Hospital for improvements in patient care, and said that local people can be proud of the progress made.

Mr Hunt was welcomed and given a tour of the hospital by Clare Panniker, Chief Executive at the Trust.

The Health Secretary gave young patients some help making Valentine cards in the hospital school room. The children might not have recognised their VIP visitor, but they were impressed with his skills with glue and scissors as he created a card for his wife.

Later he visited Burstead Ward and chatted to staff and patients recovering from surgery. 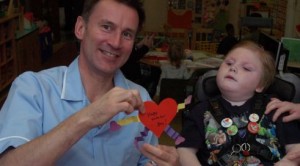 The Health Secretary said: “I had a fantastic afternoon on the paediatric ward and was really impressed by how committed the staff are. The hospital has clearly turned a big corner and is on the road to recovery, and people in Basildon can be really proud of the progress made.”