By Staff Reporter on April 12, 2014Comments Off on UPDATE: Eight Romanians charged after £1.2 million heist at Lakeside

EIGHT men have been charged with aggravated burglary following a break in at a jewellers in the Lakeside shopping centre where goods totalling £1.2m were stolen.

The Romanian nationals will be appearing before magistrates in Basildon on Monday, April 14, each charged with one count of aggravated burglary.

Dimitri SPATARU, 24. They are all of no fixed address.

Detectives are continuing to investigate a burglary at a jewellers in Derwent Parade, South Ockendon, and ask anyone with information to contact them at Grays CID on 101.

A total of eight men, aged between 18 and 26-years-old, who have not given addresses, were arrested in the early hours of Saturday morning in South Ockendon on suspicion of aggravated burglary and arson.

A dog unit was involved in a coordinated search of the area with other uniformed officers.

Detectives believe these were well-planned burglaries resulting in jewellery and high-value watches totalling around £1.2m being stolen. Officers have been conducting extensive searches in the area and items have been recovered.

They have also been investigating some road blocks made up of tyres which had been set alight which appear to have been an attempt to distract or impede the police response.

The men remain in custody for questioning today, Sunday, April 13.

Anyone with information is asked to contact detectives at Grays on 101 or Crimestoppers on 0800 555 111.

POLICE are investigating a burglary at the Ernest Jones jewellers at Lakeside Thurrock which happened a little after 3am this morning, Saturday, April 12.

With the help of some members of the public, responding officers made a number of arrests and recovered what they believe to property from the crime.

Detectives are also investigating a burglary at another jewellers in Derwent Parade, South Ockendon, which was reported just before 3.20am.

A number of scene guards are currently in place whilst the crime scene investigators carry out their tasks, including at Lakeside, but police wish to stress to shoppers that the majority of the shopping centre is open as normal.

Superintendent Justin Smith said, “This appears to have been a well planned burglary which has resulted in a number of arrests following some excellent work by the public and police in the early hours of this morning. Evidence is being recovered as quickly as possible from the scenes and we will be allowing areas to be re-opened to the public just as soon as we can.”

Anyone with any information about the burglaries is asked to contact detectives at Grays CID on 101 or Crimestoppers on 0800 555 111. 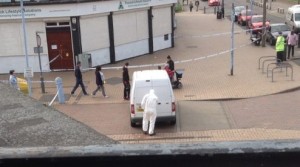