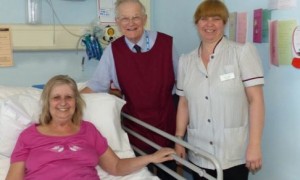 THE care and treatment of stroke patients at Basildon University Hospital has improved significantly over the last three years, according to the latest figures from the National Stroke Strategy. And the Trust has already begun to use the additional £1million investment, announced last month by health commissioners, to recruit more staff for stroke services and raise standards even higher.

During the second half of 2013, the care of stroke patients exceeded the required level for four out of five key standards:

1. Patients with suspected stroke who are scanned within an hour of arriving at hospital – 68 per cent, compared to 31 per cent in 2011

2. Patients receiving clot-busting medication, if appropriate, within three hours of arrival at hospital -13 per cent, compared to 4 per cent in 2011

3. Patients with transient ischaemic attack (mini stroke) not admitted but treated within 24 hours – 61 per cent, compared to 55 per cent in 2011

4. Time stroke patients admitted to hospital spend on a specialist stroke ward – 92 per cent, compared to 76 per cent in 2011.

Last month Basildon and Brentwood CCG and Thurrock CCG announced they would make an additional £1 million investment for stroke services at Basildon Hospital to bring them up to the highest standards for patients. A long term decision on the organisation of stroke services in south Essex has yet to be made, but the extra funding will ensure patients receive high quality stroke care.
So far, the Trust has used some of the extra funding to extend consultant cover to seven days a week. Recruitment is underway for additional staff for the stroke service, including a consultant, six occupational therapists, six physiotherapists, a speech therapists and a psychological support worker. In addition, the Trust plans to take on an extra eight nurses to care for stroke patients, and is holding a special recruitment day on April 26.

Stroke patients at Basildon Hospital also receive care and support from volunteers during their rehabilitation treatment. Michael Greenhow is one member of this valued team, who has personal experience of the devastating effects of stroke. Michael’s late wife Connie suffered a number of strokes in 2006 and spent six months on Lister Ward at Basildon Hospital, before returning home. He devoted himself to looking after her for seven years, with the help of carers, until she passed away last year.

Michael, aged 70, a retired retail manager who lives in Aveley, said: “After Connie died I gave it three months then I contacted the hospital about volunteering. I knew I wanted to work on the stroke ward.

“I am very pleased that I can make a difference and it is also helpful to me to come to Lister Ward. Connie was here for six months and the nurses and doctors who looked after my wife remember her and have made it very pleasurable to work here. Everyone
tells me Connie would be proud of me. It is nice to see people get better and able to go home.

“I help patients at mealtimes, and speak to them and their relatives to reassure them. The nurses might ask me to keep a particular eye on someone who they know needs encouragment to drink more liquids. We work as a team; they have made me feel very welcome.”

After her strokes, Connie could not walk, eat or talk. She needed round the clock care which was supported by a team of carers during the day, with Michael taking sole responsibility at night, getting up every two hours to check her.

He added: “We had a very strong marriage and I know she would have done the same for me. I became friends with the carers, the district nurses and the staff at Basildon Hospital. If it wasn’t for them it would have been a struggle. Many of them came to Connie’s funeral and several said that I should go into caring.

One Response to "Better care for stroke patients at Basildon Hospital"