Basildon hospital lauded for their care for Irene

AN elderly patient who touched the hearts of staff at Basildon Hospital was fondly remembered at an awards presentation this week. Healthcare assistants on Lionel Cosins ward were nominated for a staff award by a family friend of the patient, for ‘compassion and care beyond what could be expected.’

Mrs Irene Phillips was admitted to hospital, aged 92. She had no living relatives, but according to visitor Karen Woolford, she had always been completely independent and had never stayed in hospital in her life.

When she arrived at the hospital last March, Mrs Phillips was extremely confused and distressed, would not eat, drink or take medication and did not want to wash. But the healthcare assistants (HCAs) worked hard to gain her trust and found ways of making her more comfortable and contented.

Karen said in her nomination: “I went in one day and was astonished to find her hair had been washed and rolled up! She looked so much better, but it was the bond that had been created that allowed Irene to trust people around her which impacted on me so much.”

Karen also described numerous acts of kindness towards Mrs Phillips by the HCAs, saying: “Despite having so many difficulties with Irene, they responded in an extremely positive and caring way.”

Mrs Phillips went into a residential nursing home after her stay in hospital, and has since passed away. The memory of the elderly lady moved Clare Hall, Lisa Antill and April Wood to tears, as they accepted the Team of the Month award on behalf of all the HCAs on Lionel Cosins ward.

Clare Panniker, Chief Executive of the Trust, commended the team, saying: “It is lovely that you made such a difference for a patient who was very frightened and confused.”

The individual staff member award went to Helen Key, Assistant Contract Manager. Helen is part of the team that ensures that the Trust receives the correct payments from commissioners for the care and treatment it provides. She was nominated by colleague Gerald Darcy and Divisional Lead Emma Timpson, for going beyond the call of duty while caring for ill relatives.

Gerald said in the nomination: “Helen often works late and sometimes over weekends to finish work to very tight deadlines. She has had a difficult time recently but this has not affected her work or attendance … she has been an outstanding and hardworking colleague.” 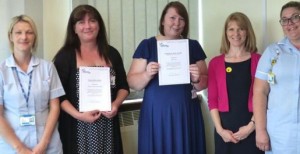 Clare Panniker congratulated Helen on her award, saying “It’s obvious you are highly thought of by your colleagues and do a very good job.”