CARDIAC patients have donated a piece of vital equipment to the hospital which saved their lives.

Representatives from the Hearts and Minds charity returned to Basildon Hospital‟s Cardiothoracic Centre (CTC) with the £7,000 automated chest compression machine.

The charity was established in 2008 by heart attack and cardiac arrest patients who wanted to „give something back‟ to the hospital where they had been rehabilitated. Hearts and Minds chairman Andrew Catley, suffered a cardiac arrest when he was refereeing a football match.

He said: “This piece of kit is a lifesaver and as a group we don‟t think we can do much better than to save someone‟s life. It replaces manual cardiopulmonary resuscitation (CPR) which is the first aid method used if someone is not breathing properly or their heart has stopped. “Manual CPR is only effective for two minutes per person because of the physical exertion. This machine will go on all day!”

The Hearts and Minds charity was set up to provide a support network for patients and their families. Andrew added: “Having a heart attack or cardiac arrest can be a very traumatic experience – it‟s a massive shock mentally and physically. The hospital can put you back together physically but it‟s also important to have support from people who have had the same experience.” The charity meets every month and raises funds through events including quiz, curry and bingo nights and barn dances. 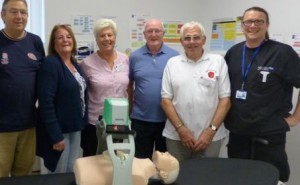