Treatment at Basildon Hospital transforms lives for those with swallowing difficulties 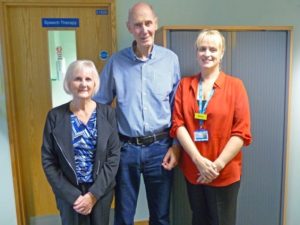 A NEW treatment at Basildon University Hospital is transforming the lives of patients with swallowing difficulties.

It’s well known that strokes and other neurological damage can affect speech, but they can also have a devastating effect on the patient’s ability to eat and drink, leaving them unable to enjoy normal meals for months or years.

Miriam explains: “Traditional dysphagia therapy is carried out once a week, and focuses on the part that doesn’t work properly, such as the tongue or the larynx. MDTP is based on intensive practise of the whole swallowing movement.

“It’s very demanding for the patients; in 15 hour-long sessions we get them to swallow over and over again, for an hour, starting with crushed up ice cubes if they are nil by mouth.
more …

“It’s not suitable for all patients; they have to be committed to it, and be mentally and physically fit. But I have now completed MDPT with seven patients and it has worked for all of them; they are all eating again. And we have other evidence-based therapies we can offer patients if MDPT is not right for them.”

One patient who is now able to enjoy his food after 18 months of not eating is Albert Ponsford, from Brentwood.
Albert, aged 73, was diagnosed with a brain tumour in 2014. Although it was benign, it was growing, and his consultant advised him that it would be best to operate to remove it. But the tumour was very large, and after the surgery Albert was left with nerve damage that affected his vision and prevented him from swallowing. He was unable to eat or drink, and had to be fed through a feeding tube directly into his stomach.

Albert says: “I was told it could take a long time for me to be able to swallow again, then Miriam contacted me to say she thought I would be a suitable patient for a new therapy. She said I would have to swallow ice chips – I thought at first she meant chips like fish and chips! We had to bring in an ice block and she smashed it up. I progressed from ice, to yoghurt, mashed banana and rice pudding.

“It felt good tasting food after such a long time. But also it felt like being a child, learning how to eat and drink again. Miriam warned me it might not be very nice but she was very encouraging and motivating. I am the kind of person who will stick at something and I had the thought in the back of my mind that I wanted to eat a Sunday roast.”

Albert, a retired gas heating designer, did so well with the programme that he only needed to complete two weeks. The first proper meal he had was a shepherd’s pie cooked by his daughter, then after four weeks he was able to enjoy one of Hazel’s Sunday dinners.
Hazel added: “I didn’t like eating in front of Albert when he couldn’t join me. If we were out shopping and I had a sandwich I would eat it very quickly and not taste it. But now he is back to enjoying all the food he likes, and we can eat out with friends in restaurants again.”

Miriam says that Albert was a model patient: “He worked very hard, and did everything I asked. I joke with my patients that at first they will hate me as I will be telling them to swallow, over and over again.”
Albert and Hazel, who have two grown-up daughters and two grandchildren, are looking forward to a Christmas dinner with their family that Albert can enjoy.