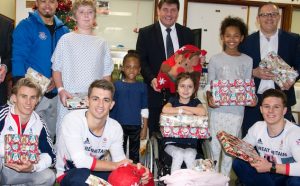 STEPHEN Metcalfe, Member of Parliament for South Basildon & East Thurrock, recently visited Basildon Hospital as part of his annual appeal for Christmas presents for children staying at the hospital.

Following a record amount of donations totalling well over £1,000, a range of presents was distributed around the children’s wards at the hospital and a new Xbox One console with games was presented for use in a teenage room.

‘I was delighted to again be joined by Max Whitlock and South Essex Gymnastics Club’s finest gymnasts to distribute Christmas presents to children at Basildon Hospital.

‘Every year children stay at Basildon Hospital throughout the Christmas season and it is important that they get the chance to feel the magic of Christmas too.

‘It was great to see the smiles on the children’s faces as they opened presents and that is exactly why we run this appeal.’

‘I have been running this Christmas collection for several years and each time I have been joined by South Essex Gymnastics Club.

‘I was particularly grateful for their support this year, as it has been an incredibly busy one with competitions including the Olympic Games in Brazil, and it was fantastic for children and staff at the hospital to see their impressive range of medals!

‘I look forward to running this appeal again next year and hope to raise another record amount of donations.’