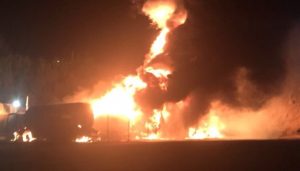 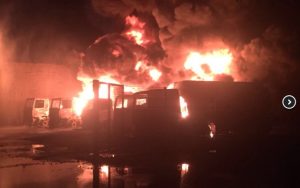 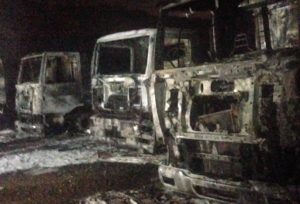 Update 3:30am – Firefighters have checked the whole incident area for hot spots and have confirmed all is safe and sufficiently cooled. The last fire engine has now left the incident.

Update 12:30am – The fire has been extinguished. Crews will now dampen down and ensure all hot spots are fully extinguished.

“When we arrived at the incident we found all five fuel lorries well alight. The smoke could been seen from miles away, and we immediately ordered our specialist appliances including the Foam unit to help tackle the fire.

“A total of five fuel lorries were involved with the fire. One lorry was empty, the other four lorries had a combined load of 45,000 litres of fuel (diesel and kereosene).

“Our priorities were to contain the fire and not let it spread to the surrounding area. We also had to make sure we contained the water running off the fire to minimalise the impact on the environment.

“Firefighters managed to extinguish the fire extremely quickly. We used foam to tackle the fire as it forms a blanket like cover over the fire and suffocates it which helps to extinguish it quickly.

“Once the fire was extinguished and we had extinguished most of the hot spots we were able to reduce the number of fire engines at the scene.

“An investigation will take place to establish the cause of the fire”.

Firefighters are continuing to tackle the fire. Crews are using foam to extinguish the fire.

Essex Police: On scene at a large fire in Thurrock, if you are nearby please close windows while @ECFRS deal with the scene @NPAS_Boreham (Helicopter) assisting.

“A fire next to the track at Purfleet is causing disruption to journeys through the station.
Services may be delayed or diverted via Ockendon. Dagenham Dock, Rainham and Purfleet will not be served.
We anticipate disruption will continue until 23:45.

You may use London Buses on route 370 between Upminster and Lakesie.

Witness tells YT: “Seen the smoke and drove to it before emergency responders got there. The flames are at least 30 ft high and can see it shooting flames out.”

Firefighters are continuing to tackle the fire. Firefighters have set up a reliable water supply using the Service’s Water Bowser (a large water tanker). The fire service have contacted the train line services to ensure no trains pass during the incident.

FYI Botany Way runs from London Road through to the Meads Corner roundabout in Purfleet.

C2C: Owing to a fire a next to the track at Purfleet, services are currently being diverted and not calling at Dag Dock, Rainham or Purfleet.

Firefighters are at the scene of a large fire involved five fuel tankers at the Botany Way industrial estate in Purfleet.

Four fire engines and a number of specialist fire appliances including our Foam Lorry, Hose Layer and Water Bowser are at the scene tackling the fire.

*This incident is on-going. Further updates will be added here shortly* 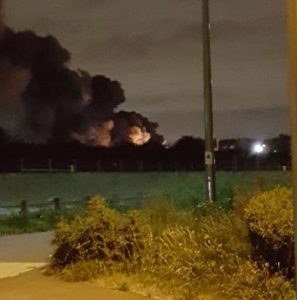 ESSEX Police are at the scene of a major incident involving a fire at a site in the Botany Way area of #Purfleet.

Updates will be posted shortly.

Reports of a large explosion and fire in the Purfleet area, near to the station.

It has been described as gas canisters exploding in industrial estate near Beacon Hill.

Fire service are in attendance.