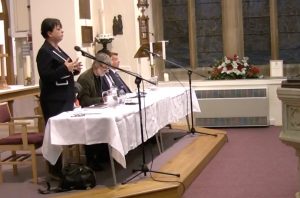 AT the Thurrock hustings last night (Monday), the Conservative candidate in Thurrock, Jackie Doyle-Price, said that it was good that hospitals could be sold off to housing developers and that this was the plan for Orsett Hospital.

Ms Doyle-Price said: “NHS trusts should be free to sell that land if they want” and went on to confirm “that’s exactly what’s going to happen with regard to Orsett Hospital.”

John Kent, Thurrock’s Labour candidate said “We finally have confirmation that this is what the Tories are planning for Orsett hospital. I think this is a huge mistake and will fight the closure.”

He continued “The problem is that this seems likely to be used as cover for pulling a lot of resources and services out of Thurrock. Does anyone really believe that once it is closed 100% of the Orsett Hospital budget will be used in Thurrock, for Thurrock?

“We need a better way than this. Rather than closing hospitals and seeing ever more services fail, Labour would commit to over £30 billion extra for the NHS – paid for by increasing income tax on just the highest 5% of earners – so that it is properly funded and can deliver for Thurrock.

“Rather than forcing hospitals to be sold off for housing, we will also boost capital funding for the NHS to ensure patients are cared for in buildings fit for the 21st century.

“Enough is enough. Thurrock can’t take any more of this Conservative Government.”

Back in February, the leader of Thurrock UKIP, cllr Graham Snell had expressed his concerns for the future of Orsett hospital after he revealed details of a briefing meeting with the health bosses. At the time, Basildon hospital said that the matter was still at “consultation stage”.

Go to 1hr 18min section of film were you can see all four candidates discuss the topic.