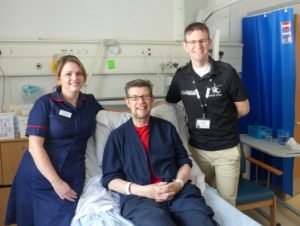 THERESA Winter, a specialist cardiac nurse, likes to arrive at work early when she is in charge of her shift on the intensive care ward at the Essex Cardiothoracic Centre (CTC). One day last month, this conscientious attitude resulted in her saving a man’s life before she even arrived at the hospital.

Theresa was one of the first people on the scene when 58 year old Colin Rushen collapsed while out dog-walking.

For anyone unlucky enough to have a cardiac arrest outside hospital, their chances of making it alive to an emergency department are less than 50%. The first link in what heart specialists call ‘the chain of survival’ is a bystander who knows how to administer cardiopulmonary resuscitation (CPR).

For Colin, the first link in his chain of survival could not have been stronger. By incredible good fortune, one of the first people on the scene was Theresa. Her expertise not only saved Colin from brain damage and possible death, but in another happy coincidence, she was responsible his care when he was admitted to the Essex CTC later that evening.

Theresa explained: “I was driving down White Hart Lane in Chelmsford when I saw man lying on the grass verge on the opposite side of the road. I did a U-turn and leapt out of the car. I did the normal checks on his airways, breathing and circulation; there were signs of agonal breathing with gasps and groaning and he was not conscious.

“I suspected cardiac arrest, and following my basic assessment in the absence of a pulse, I started CPR. During the first cycle he started to show signs of life. There were a few people around, including a male bystander who I’m sure had some resuscitation training. He helped me put Colin into the recovery position, but he stopped breathing again.

“I recommenced CPR until the first responders arrived by car. They had a defibrillator and shocked him four times – we had him back by the time the air ambulance team arrived. It was a beautiful moment when his pulse returned!”

Tony explained: “As air ambulance paramedics, we aim to provide enhanced care on the spot. The crucial element of our service is not so much the mode of transport as the equipment and expertise we have on board.

“As we hovered above I looked down and could see the first responders were there but that CPR was not in progress. That was a nice moment as I knew there must have been bystander CPR, but at the time I did not it was a nurse who had done it.”

Theresa continued: “When Essex and Herts Air Ambulance came I set off for work again I was still on time because I’d left early. As soon as I had time I contacted our cardiology ward and found out that Colin had been referred there for an emergency procedure to unblock a blood vessel in his heart.

“I knew then he would be under my care later. When he was wheeled into the intensive care it felt surreal. Looking at him on the trolley that night, having resuscitated him early that evening at the road side, there was an instant bond, like a family connection.”
Colin was referred for by-pass surgery and also had an internal cardiac defibrillator fitted at the CTC. Before he went home, Teresa and Tony Stone visited him on the ward.

Colin, who lives in Chelmsford and works as a logistics technician, said: “I don’t remember anything of the day I collapsed but when I first met Teresa and she told me the story I was amazed. Someone must have been looking after me that day. I keep thinking – what if I had walked a different route, or gone later – Theresa would not have been there.”
Theresa, who has worked for the Essex CTC since it opened ten years ago, said she was aware that other bystanders who wanted to help were relieved when they saw her uniform.

But she added: “There were moments during CPR when I wondered what the outcome would be. After cardiac arrest, brain death can occur in three minutes so immediate CPR is so important. It really shows the value of training for everyone, not just clinical staff. While I was doing it I thought ‘this is such a simple thing that anyone could do.’

Colin is married to Sue, and has two children, Nicola, 22, and Liam, 18. He had been in good health before his cardiac arrest, is active at work and does a lot of walking.

He says that the experience has had a huge impact on him and his family. “If I’d had a cardiac arrest in my garden no one of us would have known what to do. Now Nicola and Sue are determined to learn how to give CPR.”

He added: “The care at the CTC has been incredible. This could have been so frightening but the reassurance and information I’ve had from the doctors and nurses gave me confidence and made me realise this is not the end.”