Paramount Theme Park deal across the water from Thurrock “collapses” 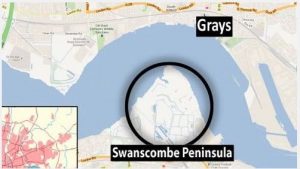 THE deal between developers and an entertainment company to build a £3.2bn theme park in north Kent has collapsed reports the BBC.

The resort on the Swanscombe Peninsula, near Dartford, is planned to be twice the size of the Olympic Park and include 5,000 hotel rooms and a water park.

The developer, London Resort Company Holdings (LRCH), announced it was ending its agreement with Paramount.

LRCH said it would still be submitting a planning application in November.

The park is due to open on the 900-acre (364-hectare) brownfield site in 2022 if a Development Consent Order is approved by the government.

It was planned to have more than 50 rides and attractions based on films and TV programmes to which Paramount has the rights.

Mr Percy said the deal with Paramount had prevented the park working with other companies.
“We are committed to going ahead – nothing has changed on that score,” he said.
“What it means in reality is that we will be able to talk to other brands, stories, films and television programmes.”
“It just gives us the freedom to work with other partners.”