Update: 11pm – Firefighters are still at the scene of the fire dampening down remaining hot spots.

Update 9:30pm – The incident is now being scaled down. Four fire engines will continue to work at the scene of the fire. We are expected to be in attendance most of the night. 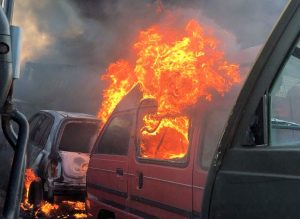 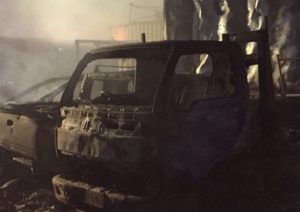 ESSEX Firefighters were called to a fire involving a stack of cars at a scrap yard in Dennises Lane, South Ockendon.

When firefighters arrived they reported that a number of cars were completely alight. The first fire crews at the scene requested extra fire engines to help with the incident as the water supply in the area was poor. In total, eight fire engines and around 40 firefighters were sent to the incident.

Update 8:45pm – Firefighters are continuing to tackle the fire which is now under control. The incident is located in a scrap yard in a farm which contains scrap cars, wood, tyres, rubbish and also some liverstock. A number of bulls are in a barn near to the fire. The animals are being kept safe by firefighters who are tackling the fire away from the barn.

Due to a lack of water at the address, firefighters have set up a water shuttle using a Water Bowser (large fire engine lorry which is full of water) to get enough water to the incident.

The cause of the fire is not known at this stage. An investigation will be carried out.

A large number of cars are on fire in Dennises Lane on the Upminster Ockendon border.