There are severe delays on the M25 anti-clockwise approaching the Dartford Crossing due to an earlier incident.

Although Highways England have worked hard to clear the incident and all lanes have since re-opened, it will take significant time for the delays to ease.

Road users should allow plenty of extra time for their journey and where possible, consider alternative routes.

When fire crews arrived they were confronted with a five vehicle crash, one of which was a mini that had caught alight and was partially wedged under a dray lorry carrying barrels.

Both carriageways of the road were initially closed to enable firefighters to deal with the incident. This involved using three hose reels and a water shuttle to put out the fire and to keep the barrels cool and prevent them from exploding. Thermal imaging cameras were also used to check the temperature of the barrels.

Firefighters worked hard to make the scene safe and administered first aid to two men until the arrival of the ambulance service. Duty of care has now been handed to South East Coast Ambulance Service and the Highways Agency.

Kent Fire and Rescue Service was called to reports of a road crash on the A282 on the approach to the Dartford Tunnel. The incident involves two cars, two heavy goods vehicles and a long goods vehicle. Four fire engines are at the scene along with Kent Police and the Highways Agency. 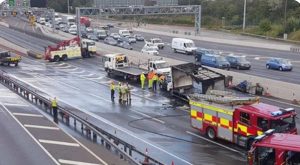 The M25 (the A282) is closed in both directions between junctions 1a and 31, due to an incident near Dartford.

Highways England are working hard to support the emergency services at the scene of the incident. Road users should consider alternative routes and allow plenty of extra time for their journey.