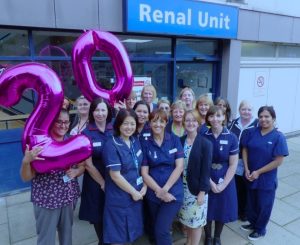 Staff and patients gathered to celebrate 20 years of lifesaving treatment since the renal unit opened at Basildon University Hospital.

The unit opened its doors in September 1997 and until then patients with kidney failure would have to travel into London, three times a week for dialysis.

Initially the unit had just eight patients, but now it has 176 patients across three sessions per day, using 24 stations at Basildon Hospital and ten at Orsett Hospital. The service has also expanded to include pre-dialysis services, vascular access, home dialysis and post-transplant services.

An afternoon tea was held to mark the 20th anniversary with around 100 invited guests enjoying tea and cake in celebration.

Dr Georgia Winnett, clinical lead for renal services and consultant nephrologist, thanked everyone for coming and praised the nursing staff for organising the event.

She said: “This shows how much the nursing staff care about the unit and their patients. It’s not just a job, they develop friendships.

“Within a few months of Dr Stephen Morgan starting at Basildon Hospital, a unit for patients with acute kidney failure was established on Elizabeth Fry ward and the service has grown from there. Dr Morgan emphasised that without the loyal support and dedication of the nursing staff and other allied health professionals, the development of the service as it is today would not have been possible.”

Sue Pickard, senior sister for kidney care services, was one of the original nurses when the unit was set up.

She said: “I kind of fell into renal nursing by accident, but I’m so glad that I did. It’s a different kind of nursing, because it’s a chronic condition, you get to know your patients very well.

“When we started, there were eight patients, three times a week. But things have changed so much, the technological advancements, the dialysis machines and what they can do and the expansion of the services we offer.

“We have identified what has been needed, such as the
nurse-led pre-dialysis, kidney care service. And now we’re part of their journey before dialysis, giving that continuity of care.

“I’m proud to be part of how the service has grown and it’s great to see so many friendly faces at our event to celebrate.”

One of the first eight patients on the unit was Tania Cox (pictured right with renal sister Lusia Stevens). Tania, 49, from Basildon, was just 17 when her GP spotted her high blood pressure and further tests led to her diagnosis of renal failure. Initially she had to go to London for dialysis, until her dad gave her a kidney and she had her first transplant.

She said: “After I had my son in 1996, my kidneys failed again but Basildon renal unit had just opened and I was one of the first eight patients. We used to all sit around hooked up to our dialysis machines in the one room, with the nurses in the middle.”

Tania had a second transplant but developed meningitis and now relies on dialysis three times a week.

She added: “Lusia trained me so now I can hook myself up to the machine and take myself off. It gives me a lot more flexibility and independence. I come in at 6.30am and leave around 10.30, so I still have the whole day.

“The nurses are really caring, especially when you’re feeling down. Coming here to the unit is like having another family, I like all the nurses and the other patients, we all get on. This is my life.”

Eve Wilkins is another long term patient who started dialysis on the unit in 1998, after being diagnosed in her early 20’s with glomerulonephritis, or inflammation of the kidney.
Eve (on the right of the picture, with fellow patient Phillipa Humphrey, left), 56, from Basildon, attends the transplant clinic, after having her second kidney transplant in 2010.

She said: “It changes everyone’s life – not just yours. When I was diagnosed I had just got engaged. My husband had never stepped foot inside a hospital before, now it’s our way of life.

“The unit and Elizabeth Fry ward work together brilliantly. I have a fear of needles and all the staff know, they have been so kind looking after me.”

Eve’s first transplant was in 1989 and lasted her 17-and-a-half years. She had her second transplant and wrote to the sister of her donor to say thank you.

She added: “I wrote the letter from my heart and she replied to say whenever she is feeling down, she rereads what I wrote.

Most people don’t even get one transplant, so I feel very lucky to have had two. I think organ donation should be opt-out. There are people desperately needing a new organ and it’s such a waste. But I understand it’s difficult for bereaved family members to make that decision.

“I urge people to have that conversation with their loved ones and know what their wishes are surrounding organ donation as it really can change someone’s life.”