How windy does it have to be for the Dartford Crossing to close? 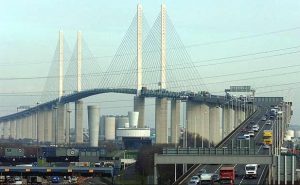 This Protocol is to ensure the users of the Queen Elizabeth II (QE II) Bridge are protected against an accident caused by high winds on this high exposed structure. The Protocol is based upon the wind speeds and direction measured by the Dartford – Thurrock River Crossing anemometers located on the QE II Bridge, and forecast data received from the Meteorological office. In the text below, “closed” means all types of vehicle are prohibited.

There is no differentiation made between high sided vehicles and other forms of traffic.

The decision to implement speed limits, lane restrictions or the full closure of the QE II Bridge is the responsibility of a senior member of Connect Plus, the operator of the Dartford – Thurrock River Crossing. This decision is based on the criteria below and an appropriate risk assessment.

4. It maybe necessary to implement restrictions based on the gusts of wind measured, even though the average wind speed is below the thresholds listed above.

5. Thespeedlimit,lanerestrictionsorfullclosurewillremaininplaceuntil the high winds have passed.