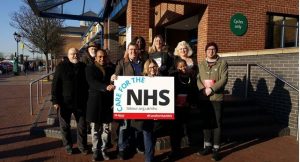 THE Thurrock Labour Party has launched its official campaign to save Orsett Hospital from the Tories plans to close it amidst an ever-worsening crisis in the NHS this winter.

After years of underfunding from the Tory government, the NHS in England has reached a point of near collapse with a lack of beds and a crisis in A&E care forced around 50,000 operations to be cancelled across the country clains Labour.

The Basildon and Thurrock University Hospitals NHS Foundation Trust has been left struggling to cope, with 99% of general and acute beds occupied in the final week of December and virtually no spare capacity for incoming patients. Worse still nearly 100 patients were left waiting in ambulances backed up outside hospitals or forced to queue in trolleys in hospital corridors.

With health services in the local area already on the brink the Thurrock Labour Party has condemned Tory plans to close Orsett hospital, vowing to fight tirelessly to save facilities used by many residents across the borough.

Thurrock Labour’s ‘Health Campaign Coordinator’ George Elcock has written to Thurrock’s Tory MP, Jackie Doyle-Price, demanding that she use her position as a Health Minister to protect services at Orsett Hospital. Labour has been particularly critical of the lack of detail on the future of services at Orsett, for example, the minor injuries unit which treated nearly 20,000 patients last year.

Speaking about the campaign to save Orsett Hospital Labour’s Parliamentary Candidate for Thurrock, John Kent, said “as a lifelong resident of Thurrock I have been fighting to protect our local NHS for decades and I am passionate about defending Orsett Hospital from this Tory government. Time and time again I hear from local residents how they are afraid that losing Orsett Hospital will make it harder for them to access vital healthcare.”

“The Tories have a clear agenda of underfunding our hospitals and then using this as an excuse to close them. Thurrock deserves better. We cannot afford to see any more health services leave Thurrock at a time when our NHS is already struggling to cope. I encourage all local residents to sign the petition to save Orsett Hospital.”

You can sign the Labour Party’s petition to save Orsett Hospital here: http://www.thurrocklabour.co.uk/save_orsett_hospital