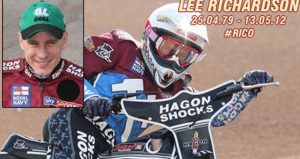 LAKESIDE have assembled an exciting field for their opening meeting of the season.

The club will once again remember one of their favourite riders with the Lee Richardson #RICO Spring Classic at the Arena Essex Raceway on Friday March 23 (8pm).

It will be the first chance fans have to see the new-look Hammers, including Australian World Cup star Nick Morris and the returning Richard Lawson, in competitive action ahead of their new Championship season.

“We’ve also invited Max Clegg; obviously he’s someone who was originally included in the Hammers’ line-up so it will be interesting to see how he gets on.

“It would be nice to see one of the Lakeside riders win it but it is a good chance for our lads to get some competitive laps under their belt.

“I’m expecting a good night of racing and I’m sure the fans will enjoy it in memory of a fabulous rider.”

Lee Richardson lost his life when riding in Poland back in 2012 but will always be in the history books as one of Lakeside’s all-time great riders.