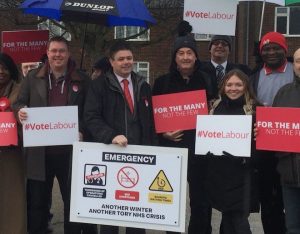 The Labour Party’s parliamentary candidate for Thurrock, John Kent, has written an open letter to local Conservative MP, Jackie Doyle-Price, calling on her to support the campaign to save Orsett Hospital.

As highlighted in the letter, Orsett Hospital provides a range of vital health services to Thurrock residents including muscle and eye care, and renal dialysis which may have no new home in the borough within the plans for Thurrock’s NHS currently being supported by local Conservatives.

Above all, the letter raises concerns over the consultation currently taking place which will decide the future of Orsett Hospital. Despite being visited by thousands of patients last year Orsett Hospital only features as a small part of a wider consultation on the future of the NHS across mid and south Essex which is open to people far outside Thurrock in areas like Southend and Braintree. The letter argues that the unique importance of Orsett Hospital to Thurrock means that its future should be determined by a separate consultation open only to local residents.

You can read the full content of John Kent’s letter below:

I am writing to you on behalf of the Thurrock Labour Party to urge you as the local MP and a Health Minister to speak out in favour of keeping Orsett Hospital open.
In particular we would like to see you speaking at the upcoming public meetings regarding the Mid-South Essex Sustainability and Transformation Partnership plans for hospitals in the region.

The most recent CQC reports into Orsett Hospital found that the hospital was meeting a great number of many essential standards of care but the latest plans for the transfer of services from the hospital to the proposed integrated medical centres are unclear and generalised.

Among the range of vital services currently provided at Orsett but with no proposed new home in the borough are muscles and bones, dialysis, and eye care. If Orsett Hospital is closed many Thurrock residents who receive vital, often daily, renal dialysis there face the prospect of a 14-mile-long round trip to Basildon Hospital for treatment.

The lack of detailed plans for the replacement site(s) and service(s) for the Minor Injuries Unit is hugely concerning. The Orsett’s minor injuries unit is not only a widely used facility; it is a much-valued one across Thurrock. It was visited by nearly 30,000 patients last year.

As the local MP, you should know the proposed alternative at Long Lane is extremely problematic. This is a site which already faces huge parking issues and the infrastructure at Long Lane simply would not be able to cope with 30,000 additional patients visiting, and that does not only mean the hospital site alone. Lone Lane itself – along with Blackshots Lane – are busy roads which would struggle to cope with 30,000 visitors.

We cannot risk a much-valued NHS asset such as Orsett Hospital based on poorly thought through proposals such as this.

The costs of updating the facilities at Orsett is cited as around £10 million but this figure pales in comparison to the £118 million to be spent across Basildon, Southend and Broomfield hospitals within these proposals. Orsett has had some form of hospital at the heart of Thurrock’s community for the past100 years. To close Orsett Hospital, while spending millions of pounds improving existing hospitals outside of Thurrock in the same package justifiably outrages many Thurrock residents.

Above all, we are deeply concerned the consultation currently being conducted in relation to these plans is primarily aimed at establishing the public’s views on the merger of Basildon, Chelmsford and Southend hospitals. The closure of Orsett Hospital is only given a very short section hidden in the depths of the consultation and it is alarming that the future of our local hospital could be determined by people living in Southend and Braintree – people who probably do not know where Orsett is, let alone understand how important it is to the Thurrock community.