The Hardie Park £20 Challenge: Shane gets all the way to Sweden!

LAST WEEK, we reported that the men behind Hardie Park had set themselves a challenge. How far could they get in 24 hours on just £20? 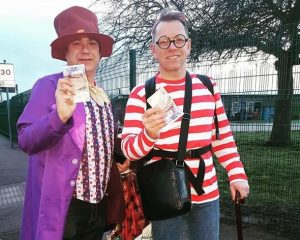 The answer is that Rob Groves got from Stanford-le-Hope to Wales. But amazingly, Shane Ralph got all the way to Sweden!

Along the way he managed to score himself a free Oyster card, a black taxi ride, a ticket on the Heathrow Express and a free flight.

Shane, 45, managed to blag via Air Miles that a friend had donated.

Shane said: “I decided to go for it and picked a flight to Sweden. I thought it would be funny, I mean I could [have] picked a location much warmer and not one that was -12C”.

He only spent £13 on his trip – forking out for headphones, chips and a celebratory beer.

However, the fancy-dress clad man had one major problem to overcome, his fear of flying.

He said: “All my life, I have had a big fear of flying – so this was going to be a real challenge for me.

“When I got on the flight, all of a sudden I found that I loved flying. I couldn’t believe it.”

He was competing against Rob Groves – who managed to get to a Welsh farm – but not as far as Shane did.

The pair run the Friends of Hardie Park volunteer group who aim to maintain and spruce up a local Essex park.

They managed to raise £3,500 for a new slide for the park from the challenge – You can donate to the charity here.

The pair posted photos and live videos along their journey and well-wishers cheered on their favourite contestant along the way.

Well done to you both, we are all very proud of you.