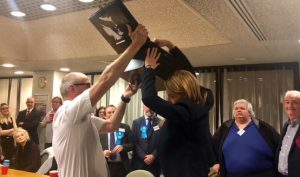 THE THURROCK CONSERVATIVES have gained Ockendon after a dead heat between them and Labour saw lots being drawn.

In a tense night, there had to be three recounts but with the votes tied, it came down to the drawing of lots.

Under the electoral law, the returning officer, Lyn Carpenter, then drew lots.

The name of the Conservative candidate, Andrew Jeffries, came out.