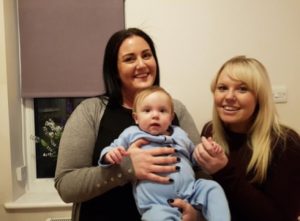 A FRIENDSHIP made in school that has endured for 20 years has resulted in a generous donation to Basildon Hospital children’s appeal.

Lucy James and Hayley Hatfield were 11 years old when they met in the lunch queue at their new secondary school, and the pair have been close friends ever since.
Lucy, now aged 30, works in the City of London, and Hayley, 31, is married with two sons, Thomas, aged 4, and George. She lives in Benfleet and also works in London, but is taking a break to care for her family.

George was born in Basildon Hospital in July 2017 and six weeks later was diagnosed with biliary atresia, a rare liver disease, which affects the flow of a substance called bile to the liver. Bile is made in the liver and passed into the gut via bile ducts. It contains substances that are crucial for digestion, and also conveys waste products to be eliminated from the body.

There is no cure for the condition, which affects about 50 babies born in Britain every year. George is likely to need a liver transplant during his childhood. He is prone to infections because of his illness and as a result has been admitted several times to the children’s wards on Basildon Hospital. Hayley and husband Anthony have been able to stay close by in Polly’s Pad, the hospital accommodation for parents funded by the Polly Parrot Appeal.

Hayley said: “The hospital staff have been amazing and the facilities on the children’s wards that the Polly Parrot Appeal provides are just incredible. George absolutely loves the sensory activities and my husband Anthony and I couldn’t have survived the initial shock of his diagnosis without the solace of Polly’s Pad.

“We’re big fans of the charity and what they do, so when Lucy offered to raise money there was no question which cause I wanted her to raise money for.”
Lucy asked family, friends and colleagues to sponsor her to take part in dry January, and raised £1,375. She said: “Not drinking alcohol did affect my social life, but in a good way. I had done Dry January a few times before but I’d never fundraised before so it felt like a double positive. It was a bit of a challenge at times, such as not having a glass of red wine with a delicious steak dinner.

“When we found out little George had biliary atresia, as Hayley’s friends we all felt so helpless. I’m not the best with saying the right thing but I wanted to try and do something to help George and also other children that are in hospital too.

“George is one in a million and he instantly had such a big place in my heart. He is an absolute joy to be around. He has been through more in his little life than some people could ever imagine, let alone go through.”

Hayley added: “Lucy has visited George so much in hospital they seem to have such a close bond. She’s been an incredible support through a hard time.”
Clair Grayston, charity office fundraiser, said: “It’s lovely that this donation has come about as a gesture of friendship, and also to hear that care from staff, and the facilities funded by the Polly Parrot Appeal have helped to make things a little easier for George and his family.”