Community anger after elderly man attacked with acid in Chadwell

A THURROCK community has expressed its outrage after a man in his seventies was attacked with acid and suffered a broken hip. 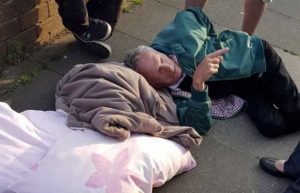 To add to local anger, after the victim was prepped and ready for an operation, it was reportedly cancelled.

Details of the incident in Chadwell St Mary on Saturday evening were posted on social media by his family and have provoked hundreds of comments.

The post, by Lewis Lily Warriar, said: “To get this of my chest now and to take my anger away around half past 7 last night in Chadwell St Mary someone decided to attack my grandad Trevor with an acid chemical.

“If that wasn’t enough either you then decide to break his hip….he’s in Basildon Hospital currently awaiting a operation.

“This could have been anyone’s grandad unfortunately it’s mine….I’m angry I’m upset but more important more worried about the after effects and health of my grandad at this time.

“Something needs to be done to stop this happening to others.”

Hundreds of people have posted their messages of sympathy and anger.

It is reported a young man, a neighbour of the victim, has been arrested by police and was seen being taken away in handcuffs.

The family also report that today (Monday) the victim was ready to be taken to theatre for an operation to repair damage to his hip but it was cancelled.

“We are appealing for information after a 71-year-old man was assaulted following an argument in Chadwell St Mary.

We received a report at 5.30pm on Saturday, May 26, that the victim was sprayed in the face with what we believe to be car cleaning product and then pushed to the floor at the junction of Waterson Road and Sabina Road. He was taken to hospital for a hip fracture.

We arrested a 40-year-old man from Grays at the scene on suspicion of assault before releasing him on bail until Saturday, June 23.