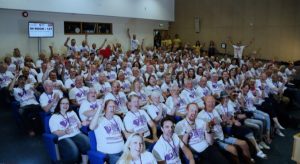 The attempt to gather the largest number of cardiac arrest survivors in one place happened on Saturday 9 June this year and the 127 participants, aged 11 to 80, travelled from across the UK to take part and meet other survivors.

The event was organised by Sudden Cardiac Arrest UK and SADS UK (SADS stands for sudden arrhythmic death syndrome) and was held at Basildon University Hospital.

In addition to the world record attempt, there were educational seminars and exhibitions, including talks from cardiac specialists and cardiac-related charities relating to all aspects of post cardiac arrest care.

The organisers were confident at the time but now official verification from Guinness World Records has been received to say this is now a new world record.

Clare Panniker, chief executive, said: “This is great news! I am thrilled for everyone whose time and dedication made this record possible. There was a great atmosphere on the day and it was inspiring to see so many cardiac arrest survivors in one place. It is a real testament to our lifesaving NHS service and the pioneering work being done in specialist units across the UK, like the Essex Cardiothoracic Centre.”

Cardiac arrest can happen to anyone regardless of age, fitness or general health. It is not the same as a heart attack. A cardiac arrest occurs when the heart suddenly stops pumping blood around the body.