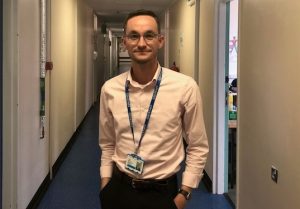 THE deputy chief executive of the Basildon and Thurrock Hospital Trust has spoken of his frustration over the way political parties have distorted the closure of Orsett Hospital by using it for political means.

Tom Abell, deputy chief executive and chief transformation officer at the trust set the record straight on several major concerns about the closure and stressed that services will not be cut.

“I find that can be frustrating at times because we keep on saying that and yet we get this wall of opposition.”

The closure of Orsett Hospital was announced at the beginning of July as part of a massive health care shakeup across mid and south Essex. Medical staff at the site currently struggle to deliver effective medical care due to outdated facilities, narrow corridors and limited resources.

Closing it will allow four modern medical facilities to be opened in Corringham, Tilbury, Grays and Purfleet and patients based outside of the borough will have services moved closer to their homes at facilities in Basildon and Brentwood.

However, a public consultation on closing the hospital was criticised by local councillors and HealthWatch Thurrock who said it “fails” residents because it was difficult for them to access online.

There were also only 2,000 hard copies printed for the whole mid and south Essex area of 1.4million people. Thurrock received just 97 copies.

Those that did take part in the consultation expressed serious concerns that losing Orsett would mean less healthcare services.

The controversy made it a heated topic in local politics especially for Labour and the Independents, who have been calling for the hospital to remain open while arguing over who has given it more support.

The Conservatives have defended the decision but stressed that they are not responsible for making it.

“The ultimate decision was made by the CCG, our commissioner, and we support it from the hospital trust perspective and have helped develop the proposals,” Mr Abell continued.

“I guess any sort of change like this does end up becoming political wherever you are, so we just have to keep reiterating we are not cutting anything and the services will only move when the new facilities are open and we’ll keep Orsett operating until that time.”

He went on to outline how the CCG intends to retain all services within the borough while also making better use of public money by rotating services across the sites on different days, rather than running them every day as they do now at Orsett.

“We will organise services that way round because there clearly is a benefit in terms of getting greater reach and accessibility in those locations. It also means that we can make much better use of the buildings and ensure they are full, vibrant and has got people going through them, rather than a space like Orsett that is empty for certain parts of the week. It is not good use of public money for us to continue to do that every day.”

The GP surgery on Rowley Road will also remain open and plans are in place to expand it in the future. A new GP surgery is also being planned for the Grays medical centre when it opens.

Mr Abell offered reassurance to patients who use the renal dialysis services at the hospital, guaranteeing that they will remain in Thurrock.

Speaking on whether the closure is set in stone, he said: “It’s not my decision, it’s the commissioner’s decision. Obviously he made a pretty clear decision in July for the closure of Orsett and the relocation of services and we are planning on that basis at the moment.”

What do the political parties think?

Conservative councillor James Halden, who chairs the council’s Health and Wellbeing Board, has previously slammed the opposition for playing “party politics” over Orsett.

He said: “The Conservatives will not indulge in gesture politics, we will keep focusing on delivering 21st century medical centres to ensure we move more out of hospital services closer to the people they serve.”

He said: “The process so far has provided very few answers on how and where crucial services will be delivered. Residents have seen this before – for example the promises given over the closure of the Grays walk-in centre. Nobody wants to see the same thing happen again, so it’s no surprise that the campaign has been so vociferous.”

“We are here to serve the residents and their voice on this matter couldn’t be clearer,” he said.

“They feel there is a desperate need to increase medical services in Thurrock. Unlike the Tories, we won’t roll over and facilitate clear cost cutting exercises to the detriment of Thurrock.”

The NHS is keen to encourage the public to get involved in the future of Orsett Hospital and a key part of this is the formation of the People’s Panel.

Mr Abell described the panel as being independent of the NHS and designed to help get the “right answers” for Thurrock.

He said: “It is really important this thing is independent of us, so we asked Healthwatch Thurrock to help us in terms of organising it, so it is not an NHS scheme. The proposal is that anybody who lives in Thurrock can sign up to be on the panel and we will see how it comes together as it will be quite different if 150 people sign up or 10.