THE medical centres replacing Orsett hospital will face delays after Southend councillors made a controversial decision to refer healthcare transformation plans to the secretary of state.

The closure of Orsett Hospital was among many proposals made by the Mid and South Essex sustainability and transformation partnership (STP) and part of a major health care overhaul. 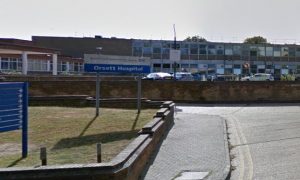 Councillors in Southend slammed the proposals over a lack of clarity and voted on October 9 to refer them to health secretary Matt Hancock who may request a review by an independent panel.

Tom Abell, chief transformation officer and deputy chief executive of Basildon Hospital, said: “This stops all the changes planned by the joint clinical commissioning group and that decision covers the whole of mid and south Essex. It puts a stop to all of those changes until we have a result from the Secretary of State.”

A spokesperson for Thurrock CCG said: “The decision by Southend Council will delay our ability to make crucial decisions around the next steps needed to begin building the new Integrated Medical Centres and start to make them a reality.

“We will of course continue with our on-going planning and preparation work so that final decisions can be made once a conclusion has been reached by the Secretary of State.”

Thurrock Council is now facing pressure to back Southend’s decision and make their own referral following fierce opposition to the closure of Orsett.

John Kent, leader of Thurrock Labour, said: “It’s the right decision to have made. The decision to close Orsett Hospital should have had its own unique consultation process and not be buried as part of a consultation for changes in the wider area.

“I maintain the decision to close it is wrong. Thurrock’s Health and Wellbeing Overview and Scrutiny Committee meets again next month and I would encourage them to make a similar decision.”

The deputy leader of Thurrock Independents, Councillor Jack Duffin, said: “Hopefully the government will now see that these proposals are not in the best interests of residents and are just a money saving exercise.”

However, Councillor James Halden, chair of the health and wellbeing board, said: “We are moving ahead with preparatory work for the proposed medical centres in line with existing plans and we continue to work with our NHS partners to deliver improved local services in Thurrock.

“Work has been going on for around 18 months, a few weeks delay is unhelpful but not very significant in the whole scheme of things. This position remains unchanged and Orsett Hospital will not be closing until the four Integrated Medical Centres are up and running. No clinical services currently serving Thurrock residents will be moving out of Thurrock.”