RESIDENTS of Purfleet and surrounding areas came out in force on Sunday evening for Purfleet’s Battle’s Over centenary commemoration for the end of World War One. Estimated crowds of over 400 people gathered for what proved to be a very successful evening. 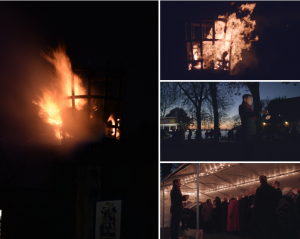 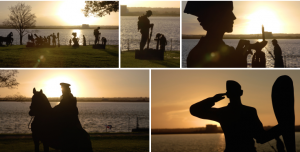 The day started with over 20 x WWI silhouettes being erected on the green up to 8ft. high. They drew a lot of interest during the day from many people, most were photographing them.

As darkness fell crowds started to arrive. The event started at Purfleet Heritage & Military Centre where there was a display of artwork and poems from the primary school. The centre was packed solid until people started to walk to the green where The Tilbury Band played in front of an open top WWI period bus. Next to the Royal Hotel a 16’ screen showed footage from the WW1 all evening. soup on the green was served by torch light adding to the atmospheric feel of the evening.
Cadets and Scouts marched through from the Heritage Centre to the green.

A service included the hymn Abide with me.

Steven Cape, a former fireman of Thurrock and author of ‘Thurrock’s Great War Memorials a Centennial Remembrance’ gave a word perfect reading of the rank, names and regiment of the 26 soldiers who were resident in Purfleet and died during the Great War. Steven has personally visited and photographed over 95% of the war graves or memorials of those who fell during the Great War from Thurrock, an appropriate choice to read the names.

26 Scouts and Cadets joined together each holding a soldier silhouette with a name of the fallen. As each name was read a torch shone on the name, before being turned off. The silhouettes were placed in uniformed rows around a vintage fire engine from the Essex Fire Museum.

Our Mayor gave another faultless reading of a Tribute to Millions.

Before the beacon lighting Paul Carver from Tilbury band played the Last Post and Reveille from the top of the open bus facing out towards the River Thames, lights dimmed and a spotlight highlighted the bugler.

At 7pm Roger Picket former fireman from Essex Fire Museum gave a theatrical lighting of the newly restored beacon. It was the highlight of the evening when over 1,300 beacons were lit around the country at the same time.

Purfleet’s own Royal Opera House Thurrock Community Chorus rounded off the evening with two pieces including Fuoco di Gioia from Otello by Verdi.

Purfleet-on-Thames Community Forum would like to thank everybody attended and everyone who helped make this a very successful evening for the residents of Purfleet and Thurrock.