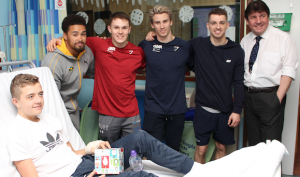 They gave the children a huge festive boost and spent time with the young patients and their families and gave out Christmas presents.

The presents were kindly donated by local individuals and businesses, arranged by Stephen Metcalfe MP.

Jerusha Murdoch-Kelly, head of nursing children’s services said: “Christmas is always a difficult time for our young patients, who miss out on all the activities their friends are doing. So for Stephen & Max to annually come and spend their time with them, it really does mean a lot.

The gifts are lovely, but it’s more the feeling that they’re not forgotten that is the real gift.”

Stephen Metcalfe is the MP for South Basildon and East Thurrock and Max Whitlock is one of the counties star gymnasts, who trains at the South Essex Gymnastics Club.

Stephen Metcalfe said: “I’ve been doing this for several years with the South Essex Gymnastics Club and It’s great to continue to have their ongoing support. I would like to thank all those who have generously donated gifts and their time, in order to bring some additional cheer to the children’s ward this Christmas.”