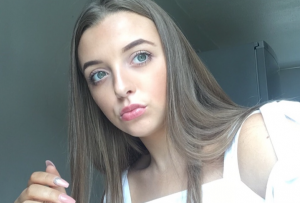 A SOUTH Ockendon has warned of the dangers of drink and drug driving after she was seriously injured in a crash caused by a motorist above the legal limit.

Sarah Cornish suffered a fractured spine, breaks to both her legs and a broken arm when the car she was a passenger in collided with a parked vehicle. 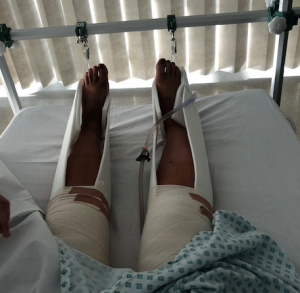 The driver, Sarah’s former boyfriend, had been travelling at more than twice the speed limit when the crash happened in Fobbing, Thurrock. He was found to be above the alcohol limit and had ketamine and benzoylecgonine in his system, Basildon Crown Court was told.

Sarah, aged 18, did not know her former boyfriend had been drinking or taking drugs when she got into the car. She is no longer in a relationship with him.

Following the crash she instructed expert serious injury lawyers at Irwin Mitchell to help her access the specialist rehabilitation and therapies she needs to overcome her injuries. 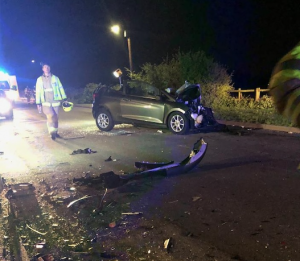 Sarah has now joined her legal team at Irwin Mitchell in warning of the consequences of drink and drug driving.

It comes after the driver was jailed for three years for causing the crash.

Imogen Lowden, specialist serious injury lawyer at Irwin Mitchell representing Sarah, said after the hearing: “Sarah’s case is the latest example where people have suffered serious injuries as a result of selfish drivers who think it’s acceptable to get behind the wheel after drinking or taking drugs.

“Driving while unfit through alcohol or drugs should have no place in society today. We hope that today’s sentence will act as a deterrent and make drivers think about the consequences of their actions, so the number of people killed or badly injured on our roads reduces.

“Sarah has made tremendous progress so far in her recovery but still faces many challenges to overcome her injuries the best she can. We will continue to support Sarah throughout her recovery.”

Sarah, of South Ockendon, was in a relationship with Kieran Moore.

On 5 May, 2018, he had picked her up from her home at about 8.45pm to go out for the evening. However, Sarah received a call from her pregnant sister Emily, saying her waters had broken so he dropped her back home. Sarah then went to the hospital with her family.

As Emily was in the early stages of labour, Sarah’s then boyfriend picked her up from Basildon Hospital at approximately 11.15pm with two friends in his Ford Fiesta.

They went to The Bull pub in Grays. Sarah spent time with her friends while Moore played snooker in another room.

The pair and two friends left the pub in Moore’s Fiesta about 20 minutes later. As the car approached Fobbing High Road, Moore started to speed up. Shortly afterwards the Fiesta hit a parked vehicle.

Sarah was trapped in the wreckage for about an hour and had to be cut free by firefighters.

She was taken to Basildon Hospital and transferred to the Royal London Hospital because of her injuries.

She underwent surgery to insert metal rods and pins in her legs from her knee to her hips. She spent 10 days in hospital. Her mum Alicia Tilbury had to take a month off from her job as a nursery nurse to care for Sarah.

Sarah was working as a business admin apprentice at the time of the accident. Due to her injuries, she eventually returned to work on a part-time basis. However, she was let go by her employer in September 2018.

Sarah said: “I remember being in the car with my seatbelt on and then without warning, it suddenly started to speed up.

“I do not remember the moment of impact but I have been told that the passenger side took all the impact.

“Before the accident I was fit and healthy. Coming to terms with my injuries was really difficult. I am a very determined person and did not like other people having to do things for me.

“However, that determination means I do not want to let what happened affect my life. I know I have many challenges ahead but I am determined to overcome my injuries the best I can.

“I just hope that by speaking out drivers are aware of the misery they can cause by breaking the law. I would not have got in his car that night if I had known Kieran had been drinking and taking drugs.”

Another charge of causing actual bodily harm to another passenger, which Moore denied, was allowed to lie on file.

He will serve half his sentence before he is released on licence. Moore also received a five year driving ban when he was sentenced on Friday.