Update 11:45pm – The scene is now completely cooled and the last firefighters have now left the scene.

The fire investigation has been carried out and it has been found that the fire started accidentally in a pile of scrap electrical items.

Shortly, the firefighters who have been at the incident tackling the fire this afternoon will be replaced by six new fire crews who will take over and continue to work to extinguish hot spots and will ensure the whole incident is cooled and safe.

Update #Grays – shortly the firefighters who have been tackling the fire this afternoon will be replaced by six new fire crews who will take over and continue to extinguish hot spots. https://t.co/ER1O1jcxm7 pic.twitter.com/FWdpMoZUnX

Site staff are helping firefighters by using diggers to move items so they can be checked and cooled by the crews.

Update #Grays – VIDEO – firefighters have water hoses attached to an aerial laddert platform (ALP) to get water onto the fire from overhead. Firefighters are making good progress extinguishing the fire. https://t.co/ER1O1jcxm7 pic.twitter.com/j1V53G4dwv

Firefighters are continuing to tackle the fire using a number of hoses from a number of different locations around the unit.

Firefighters are also using an aerial ladder platform (ALP) to pour water on the fire from above, 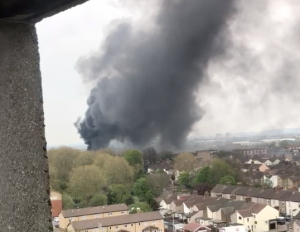 Firefighters have been called to a fire at an industrial estate at Rectory Road in Grays involving one unit and a HGV. 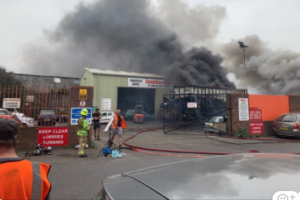 This incident is ongoing.

More details will be added shortly.

YT has recieved reports of a fire in Grays.

We understand it is in the vicinity of the Globe Works industrial estate near Little Thurrock.