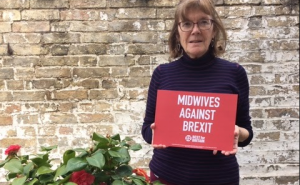 FOLLOWING the arrival of Royal Baby Sussex over the Bank Holiday weekend, Best for Britain has released an open letter today, supported by the Royal College of Midwives CEO, MPs and local midwives, to raise awareness of Brexit’s threat to UK maternity services.

The letter is launched on the day it’s revealed 5,000 EU-trained nurses and midwives have left the UK since the triggering of Article 50 in March 2017, with many of those identifying Brexit as the trigger.

Best for Britain has published an open letter, endorsed by the Royal College of Midwives CEO Gill Walton and signed by midwives and MPs in the South East and across the UK, slamming Brexit’s impact on maternity services in the UK and calling for a final say on the Brexit deal.

Data published today by the Nursing and Midwifery Council (NMC) shows almost 5,000 nurses and midwives from EU27 countries have quit the NHS in the past two years, since the triggering of Article 50. Following a peak of 38,024 in March 2017, the number of EU-trained nurses and midwives has reduced to 33,035 this year – a 13 percent drop.

The figures reveal that the number of people from the EEA on the NMC register decreased by 5.9 percent between March 2018 and March 2019.

Elsewhere in the survey findings, 51 percent of those nurses and midwives who trained within the EU, left the register and responded to the survey stated Brexit as a reason for encouraging them to consider working outside the UK.

“EU midwives provide NHS care to tens of thousands of women every year and they make a vital contribution to the provision of care; we’re lucky to have them. Unfortunately over the last year just thirty-three midwives arrived from elsewhere in the EU to work as midwives here in the UK and we used to count them in their hundreds.

“UK maternity services are already stretched and short-staffed, but Brexit threatens to make things even worse.

“It’s my belief, and the firm belief of the Royal College of Midwives, that it should be we, the people, who make that decision about the future of our country, and not just a handful of politicians. All of us deserve a final say because this matters so much to the country, the NHS and our maternity services.”

“The years since the Brexit referendum have seen EU midwives leaving in droves. As a trained scientist and midwife, I believe that remaining in the EU is the best option for midwifery, and that we must fight for a public vote on whatever Brexit deal is passed in parliament.”

Natalie Linder, senior midwife from Kent said:
“I have worked alongside midwives from other EU countries for almost all my career as a midwife and they have always made a fantastic contribution to our maternity services.

“Brexit has already deterred midwives from coming to work in the UK over the past couple of years due to all the uncertainty surrounding their working status. This has and will continue to impact massively on maternity services, particularly as we are already short midwives in England.

“Fewer midwives puts more pressure on all maternity services and it means maternity care provided to all women suffers. We need EU midwives to come and work in the NHS so there are enough midwives to care and support women.”

“The national midwife shortage will only worsen if we cannot keep or attract EU-trained midwives. This then has a direct effect on the care we can offer to women and their families, and increases the pressure on all maternity care staff.”

“As a qualified midwife, who has not only practised but has also conducted ground breaking prevention prevention research in Europe, I have seen first hand what can be achieved when we work together.

“Losing the wealth of expert and compassionate care given to mothers and babies by midwives and other team members from across the EU, we are jeopardising our access to international research which improves maternity and neonatal services through the madness that is Brexit.”

“Having been on an interview panel where applications were down 89% when the midwife bursary was first taken, it’s a very scary time.

“Since Brexit, the calibre of applicants has dropped which means we will either be accepting less than suitable students which will have a knock on effect on the care we provide or having to train less midwives to ensure that only the best and most suitable qualify

This will only add to the existing stress of experienced midwives, meaning higher numbers leaving earlier. Brexit is a no win situation.”

“Brexit poses a real danger to maternity services here in the South East.

“The vote to leave the EU has already been a major driver of EU27 midwife departures, with far fewer EU-registered midwives coming to the UK. Brexit is haemorrhaging cash out of the NHS, preventing our midwives and maternity support workers from providing the same quality of services and care.

“Now that Brexit’s threat to our NHS is becoming painfully clear, it’s only right that the public get the chance to sign off on any deal that parliament agrees on.”

“Our midwives do amazing work by keeping thousands of new mothers and babies safe and healthy every year. But they’ve had enough of years of austerity, funding cuts and staffing shortages. Now Brexit threatens to leave our maternity wards understaffed and overstretched.

“It’s no wonder that midwives are calling for a public vote whatever Brexit deal parliament can agree on. That’s what the people of this country deserve.”

“Midwives and the care they provide are crucial for ensuring that women have a safe and comfortable experience during their pregnancy, childbirth and postnatal period.

“But the Brexit vote has forced many UK- and EU-trained midwives to search for opportunities elsewhere.

“Any form of Brexit undermines the quality of services available to new mothers and babies. That’s why we need to put the Brexit process back to the people so that they can decide whether to back it or stop this whole process and keep our current EU deal.”