Warning to Thurrock residents over mumps

PARENTS have been told how important child vaccinations are to avoid “completely unavoidable but sometimes serious infections” – after a sharp rise in mumps and measles. 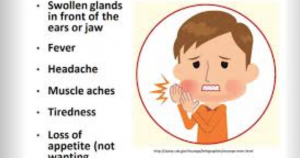 The area also saw 31 suspected cases of measles at the start of this year, up from 19 last year, and the highest number since 42 cases in 2014.

John Swanson, specialist nurse in the infection prevention and control team for Mid and South Essex CCGs, said: “It’s important for your children to have the measles, mumps and rubella (MMR) vaccine to protect themselves and others from these completely unavoidable but sometimes serious infections.

“The fact that mumps and measles cases are increasing is the knock on effect in the reduction in the number of people completing the course of the MMR vaccine which is given in two separate doses.

“Some people have the very first dose don’t but don’t have the subsequent ones.

“If adults have not had the vaccine or not had the infections themselves, they can also have the MMR.

“If in doubt about your own protection or that of your children and you want more information, contact your GP practice or speak to the school nurse.”

Registered medical practitioners in England and Wales have a statutory duty to notify their local authority or local health protection team of suspected cases of certain infectious diseases.

While not all suspected cases will turn out to be mumps or measles, figures from Public Health England (PHE) show confirmed cases across the region are also rising.

PHE is also calling for all parents to get their children vaccinated against MMR when the vaccine is offered, or for them to take it up now if they did not have it at the scheduled time.

In the first quarter of 2019, there were 231 confirmed cases of measles across the whole of England.

As measles is highly infectious, anyone who has not received two doses of MMR vaccine is at risk, particularly unvaccinated people travelling to countries where there are currently large outbreaks of measles.

The recent measles cases are mainly occurring in under-vaccinated communities, particularly those with links to other countries with ongoing measles outbreaks. There has also been some spread into the wider population, such as those who may have missed out on the MMR vaccine when they were younger.

Head of immunisation at Public Health England, Dr Mary Ramsay, said: “Measles can kill and it is incredibly easy to catch, especially if you are not vaccinated.

“Even one child missing their vaccine is one too many – if you are in any doubt about your child’s vaccination status, ask your GP as it’s never too late to get protected.”

In January to March, 795 cases of mumps have also been confirmed. This is nearly three times as many as the 275 cases reported in the same period in 2018, and the highest number confirmed since 847 cases in 2014.

No new cases of rubella were reported.

Public Health Minister Seema Kennedy said: “Over 30 years ago we introduced the MMR vaccine and since then our world-leading vaccination programme is estimated to have prevented 1.8 million painful and potentially fatal cases of measles.

“The vaccine was an enormous catapult for improving the health of children and young people, and still is.

“No child or young person should have to suffer from mumps, measles or rubella, and we must curb this recent increase in cases so we don’t see a return of horrible diseases of the past.

“By taking up the MMR vaccine parents and young people can prevent more cases and I would urge everybody to do so.”

In the final quarter of 2018, 94.9 per cent of eligible children aged five received the first dose of MMR. To achieve herd immunity for measles at least 90-95 per cent of the population need to be fully protected.

One dose of the MMR vaccine is about 90 to 95 per cent effective at preventing measles. After a second dose the level of protection is around 99 per cent.

Coverage of the second dose is at 87.4 per cent for children aged five. PHE is therefore urging those who have only had one dose to ensure they are fully vaccinated with two doses.

Professor Helen Bedford of the Royal College of Paediatrics and Child Health (RCPCH), said: “Measles is a highly infectious, potentially serious disease and England has not escaped the recent increase in cases we have seen globally.

“Luckily we have ready access to a free, highly effective and safe means of stopping ongoing outbreaks in their tracks: MMR vaccine.

“Vaccination only takes a few minutes but will protect you from a nasty disease which could result in life changing complications or even death. One dose of vaccine is good but two are better for best protection.”

Kinds Inspire: Together we can help our young people to heal