EXTINCTION Rebellion Thurrock welcomed a good turnout for their first meeting held at the Thameside Theatre on Wednesday (11th September)
Cathy Sisterson who organised the event along with Victor Rikowski, spoke of her own experience at the protests in London and her concern for ecological breakdown and loss of biodiversity and species.

Victor Rikowski outlined his own experience at the national protests and how he felt there was a need for an Extinction Rebellion local group in his home town of Thurrock. 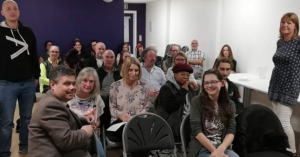 Cathy Sisterson then welcomed Jonathan Fuller guest speaker who spoke about his role in the Extinction Rebellion London group.
He gave an overview of the climate science and the urgency of addressing our climate breakdown.
He shared some of his experiences at XR protests which included a ‘Tell The Truth’ campaign which was an Extinction Rebellion initiative for the media to print factually and honestly about the potential disaster we are all facing.
Jonathan spoke very highly of the police at some of these actions and praised them for their caring nature even in the face of arrest.

Matt Hill from Thurrock Cycling Campaign spoke of how cycling can play such an important role in reducing our carbon footprint and over reliance on oil.
Quoted that road transport consumes 44% of all oil burnt across our planet.

‘Cycling Is Core To The Rebellion’
– Donnachadh McCarthy.

Towards the end of the meeting members of the group were encouraged to speak of their concerns and ask questions.

In conclusion courses of action were discussed and how members could bring the attention of the climate emergency to Thurrock.

Groups of Extinction Rebellion are growing rapidly across the country, raising the most important issue humanity has faced for generations, possibly ever
The Extinction Rebellion target of a carbon neutral society by 2025 will pose an enormous challenge but absolutely essential.
Our lives really do depend on it.