MEET baby Abiman, now three days old, who was rescued by firearms officers over the weekend.

Abiman Ramanan weighed 7.2lbs when he was delivered at Basildon Hospital by his mother, Metha, on Saturday 12 October. 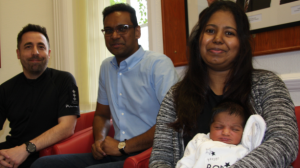 Metha almost gave birth next her husband, Nava, after they were both stuck in traffic along the A13 in Stanford-le-Hope at around 8am.

Firearms officers were the closest units and quickly came to her aide before driving Metha to Basildon Hospital in one of their armed response vehicles.

They also drove Nava to hospital in his car.

Abiman also received a cuddly toy of Police Dog Baloo, a retired police dog who sadly lost one of her legs during an emergency.

Father-of-two Nava said: “My family and I can’t thank the firearms unit enough for their help at the weekend.
“Our sweet baby boy Abiman was delivered within couple of hours of the lift they kindly provided.
“The officers were shining examples, keep up the good work in making Essex safe.
“I’d like to end by saying thank you everyone for your kind words.”