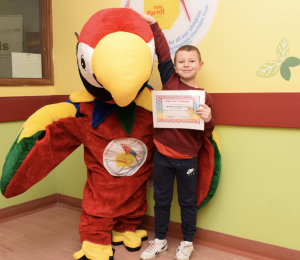 AN eight-year-old boy has raised funds for children who are receiving treatment at Basildon Hospital, where he was born.

Brandon Wildman-Tutt, recently visited the hospital, with mum Shirelle to donate £70 of his pocket money to The Polly Parrot Appeal, the hospital’s children’s charity.

The Polly Parrot Appeal raises funds for the children’s wards, including the neonatal intensive care unit (NICU) and children’s oncology.

Money raised from the appeal is used for distraction and sensory equipment, toys, child-friendly furniture, decorations, TVs and other electronic gadgets.

Brandon said: “I was born in Basildon Hospital, so I thought it would be a good idea to raise money for children who are patients there.”

Shirelle encouraged her son’s charity saving efforts and said: “I bought him a money box and he immediately started putting loose change into it. When it was full, he said he wanted to donate to the hospital which I thought was a lovely gesture.”

Clair Grayston, fundraising officer at Basildon Hospital, said: “It’s great meeting such a kind hearted young boy who has thought about other children.”

Brandon wants to beat his current fundraising total and save more money next year.