Thurrock Council documents reveal that homelessness is soaring in the borough 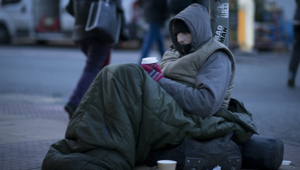 COUNCIL documents have revealed the number of people at risk of homelessness in Thurrock has shot up by more than 30 per cent in the past 12 months while rising house prices have left more than half the population unable to buy a home.

Thurrock Council has published a detailed report that estimates between April 2019 and the end of March 2020, around 2,150 residents will have approached housing services, a 33 per cent increase from the same period the previous year.

The majority of people presenting to the council have been single mothers but many others have been left at risk due to a tenancy in the private sector being terminated or exclusion from family.

The increases have come as house prices in the region continue to soar with research showing that between February 2014 and February 2019 the average house price in Thurrock increased by 50 per cent from £199,666 to £298,694.

Real estate experts Savills also examined house price increases over a ten-year period and found that in Thurrock it is the equivalent of a £30 rise every day – the third biggest increase in Essex, behind only Southend and Basildon.

The council’s report goes on to explain “approximately 52.9 per cent of Thurrock households would not meet the affordability requirements to purchase the smallest types of property available on the housing market”.

It adds: “For terraced houses, semi-detached houses and detached houses, the percentage of first-time buyers in Thurrock that would not be able to afford to purchase these types of properties are 76.6 per cent, 84.2 per cent and 92.4 per cent respectively.”

It is estimated that a first-time buyer would need an income of between £35,000 and £40,000 if they are to afford to purchase a flat or maisonette in Thurrock.

The Office of National Statistics shows the average salary for residents after deductions is just £22,751.

This research is due to be discussed by the council’s Housing Overview and Scrutiny Committee next week when councillors review a Homelessness Prevention and Rough Sleeping Strategy.

Meeting chair Councillor Lynn Worrall said: “Sadly, we have got to a stage where the developers are getting approval for building houses that do not have our own agreed levels of social and affordable homes built into their planning permission.

“This has resulted in the houses that are built valued out of reach for Thurrock residents and many young families are simply priced out of the market altogether.”