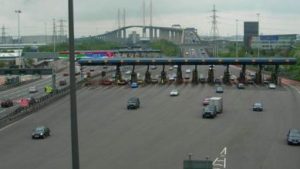 DARTFORD Crossing charges have been described as “morally dubious” after new figures show income generated at the vital crossing has increased to nearly £200million.

Highways England says the £8.3million increase on the previous year’s income comes from a £4.1million increase in income from the crossing’s road user charge, an increase in traffic volume and a reduction in discount available to Class B account holders from October 2018.

It also benefited from a £3.1million increase in the number of tickets being issued and paid.

The crossing made net proceeds of £7.4million from an increase in income of £8.4million, offset by a £1million increase in expenditure.

Under the original agreement when the bridge was built, tolling was supposed to stop once it had paid for itself, which was almost 15 years ago.

But in 2001, it was revealed that the government had backtracked out of the initial agreement. A new charging scheme was introduced at the crossing from 1 April, 2003, which has been in place since.

Up until 2018 drivers could get a 33 per cent discount on the £2.50 crossing, meaning they paid just £1.67 per crossing, if they had an account which was kept topped up.

But now drivers with the account will have to pay £2 each time they cross.

A spokesman for the Alliance of British Drivers said: “It’s a poor excuse to charge people for using that crossing to limit congestion.

“It’s really about making money. There are other major crossings in the UK which are free such as the Severn Crossing and others in Scotland.

“So why should the Dartford Crossing not be made free? It’s about making money.”

An increase in the number of people getting fined – generating an additional £3.1million – has also been attacked.

The spokesman added: “The other problem is the free flow charging system which means enormous numbers of people get fined.

“These are people who have basically forgotten to pay or who were not aware they should pay.

“So this is morally and ethically very dubious. These are not people who are deliberately trying to avoid paying.

“It’s quite ridiculous the government can make so much out of people.”

He added: “There was a promise made which all subsequent governments have reneged on which shows how morally dubious any politicians are.”

Highways England says Dart Charge delivers benefits to the UK economy and these are primarily delivered through a “reduction in congestion and easing traffic flow at this vital crossing link and the wider south-east road network”.

The introduction of this scheme is expected to deliver approximately £1.6 billion of economic benefit over 25 years, according to Highways England.