A KIND-HEARTED man has been standing and applauding NHS staff at Basildon hospital every morning as they come into work.

Colin Wilkinson, a 65-year-old born-again Christian, has helped put up a rainbow banner outside Basildon Hospital, supporting the work they do.

On Saturday (25 April), Mr Wilkinson went up to the banner to pray but then began clapping as NHS staff came into work at the hospital.

Mr Wilkinson intends to keep clapping the staff every morning until the pandemic is over.

The story of the kind-hearted Samaritan clapping the NHS staff has taken off all over social media, with many seeking to put a name to the face they had seen.

Mr Wilkinson has received plaudits by many in the community for his efforts.

Reported first by Echo news, Mr Wilkinson said the following: “I’ve had nurses coming out to give me breakfast and talk to me. There was another lady who came out and had just lost her nan, and was in bits, and we both had a good cry.

“It’s been such a blessing.

“Without the banner, and the help to get it there, this would not have happened.

“God initially told me to do it for seven days. But now, I will do it for as long as it takes to get through this. These workers need to know they are being thought of.”

Nurse Toma Gen, who works at the hospital, said: “We are so grateful for what he does and what a difference he makes to us all at these worrying and hard times.”

Fellow worker Kirsty Scully said: “He honestly made my day. I wasn’t feeling great about coming into work that day.

“I drove by and he clapped us as we come on shift he nearly made me cry, such a thoughtful man.”

Basildon and Thurrock University Hospitals Charity shared this message (29 April) on their Facebook this morning, along with accompanying images:

“So this morning we went to thank Colin for the joy he is bringing to staff by clapping them into work each morning. 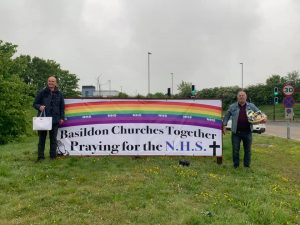 The charity took the opportunity to hand a gift basket to a visibly delighted Mr Wilkinson.

“Just a little something to show our appreciation.” (see image below) 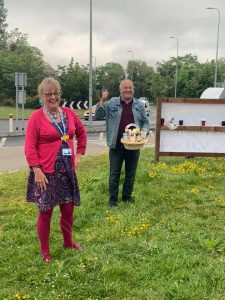